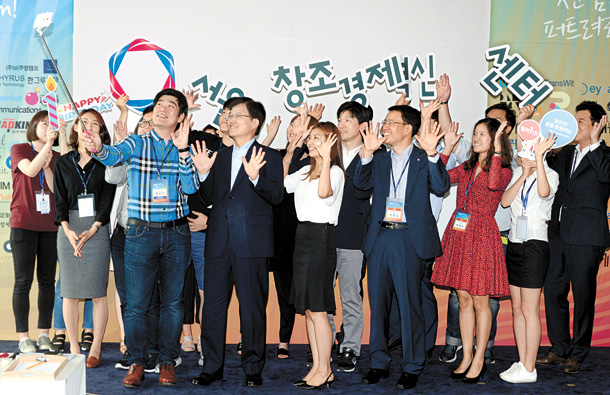 Seoul Creative Economy Innovation Center celebrated its one-year anniversary on Tuesday, acknowledging the financial and systematic support it has given to local budding entrepreneurs and helping them advance in the overseas market.

The center is part of President Park Geun-hye’s initiative for “a creative economy,” established by CJ Group and the Ministry of Science, ICT and Future Planning to incubate local start-ups.

In the past year, the center has supported 216 small and mid-sized firms, attracting 13 billion won ($11.4 million) in investments. The center said it has also created job opportunities for 154 people.

The incubating center, which opened alongside the creative center in Gwanghwamun, houses 72 companies that can get mentoring and hold meetings with potential investors.

“I am pleased to announce today that the center has played a leading role in creating new value and job opportunities based on creativity amid the sluggish economy,” Park Yong-ho, the center’s director, said on Tuesday.

“I believe creativity is contagious. Business models, ambitions and challenges that started here will be delivered to all regions of the country.”

Dot, a start-up that created a braille-based watch, spread its wings at the center. Even before its official launch, Dot has plans to advance in 10 overseas markets, inking export deals worth 37 billion won.

Ingine, a venture company that generates electricity from waves, has raised 2.4 billion won in funding and will export its technology license to Japan for 250 million won.

CJ Group secured a distribution channel through its drug store Olive Young and its home shopping platform CJ O Shopping for the incubators.