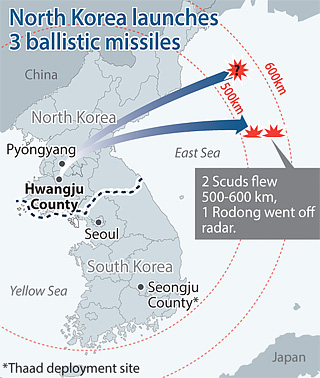 North Korea launched its shorter- and mid-range ballistic missiles toward its eastern coast between 5:45 a.m. and 6:30 a.m. from its western central Hwangju County in North Hwanghae Province, according to the Joint Chiefs of Staff (JCS).

Two of the missiles were presumed to be short-range Scuds and flew between 500 to 600 kilometers (311 to 373 miles) before falling into the East Sea, according to the JCS.

The other was presumed to be a Rodong intermediate-range ballistic missile, and the military said it is in the process of analyzing its flight range because it disappeared from its radar.

A Rodong missile, which can deliver a nuclear warhead, has a range of up to 1,300 kilometers.

The launch comes one day after the U.S. military revealed its advanced Terminal High Altitude Area Defense, or Thaad, battery in Guam to South Korean media on Monday.

This follows Seoul and Washington’s recent decision to deploy the U.S.-led Thaad system to Seongju County in North Gyeongsang, a move strongly opposed by North Korea.

The range covered by the Scuds is far enough to reach all of South Korea, according to the JCS, including the country’s southern region where the U.S. Forces Korea plans to deploy a Thaad battery.

Shin Jong-woo, the secretary-general of the think tank Korea Defense and Security Forum, said, “Launching the Rodong missile to fly a distance half its range of 1,300 kilometers can be seen as a form of armed protest by showing it can target South Korea.”

South Korean military officials said that the trajectory of the Rodong missile could not be traced immediately because it disappeared from the radar, adding it is analyzing its path in cooperation with the U.S. military.

Another army official said, “While further analysis is needed, the Korean Army tracked three missiles but the Japanese radar tracked only two. This can mean that one missile disappeared before it was detected by Japan’s radar, which means it failed or that the North intentionally exploded it midair.”

Pyongyang usually fires its missiles from Wonsan in Kangwon Province from its eastern coast, but this is the second time this year since March 10 that it launched a missile from Hwangju, crossing over land, toward the East Sea.

This latest missile launch was immediately “strongly condemned” by the South Korean government.

Cho June-hyuck, spokesman of the Foreign Ministry here, said in a briefing Tuesday, “North Korea’s ballistic missile latest launch is a blatant violation of UN Security Council resolutions and threatens peace and safety on the Korean Peninsula, and we strongly condemn this provocation.”