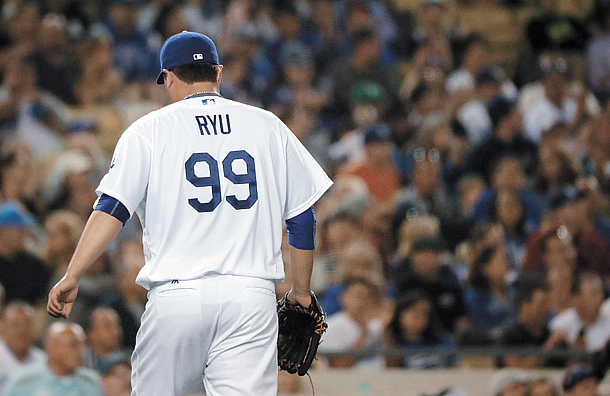 Ryu Hyun-jin of the Los Angeles Dodgers is back on the team’s disabled list after just one outing. [AP/NEWSIS]

Only a week has passed since the MLB All-Star break, and injuries are already plaguing the season for Korea’s big leaguers.

Ryu Hyun-jin of the Los Angeles Dodgers and Kim Hyun-soo of Baltimore Orioles were placed on the disabled list of their respective teams on Wednesday.

According to the Dodgers, the team placed Ryu on the 15-day disabled list for left elbow tendinitis, rendering it impossible for Ryu to take the mound today against the Washington Nationals.

After receiving surgery on his left shoulder in May 2015 to repair a torn labrum, the piece of fibrocartilage affixed to the shoulder socket that keeps the ball of the arm bone in place, Ryu went through a stint in rehab. 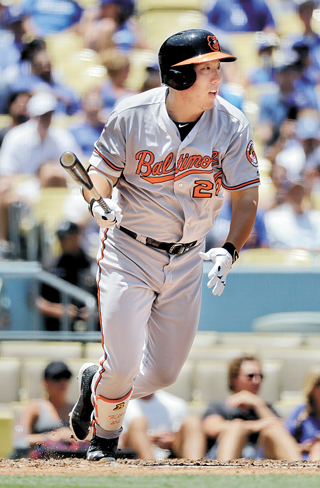 Baltimore Orioles outfielder Kim Hyun-soo has been listed on the team’s disabled list due to a right hamstring strain. Kim is expected to rejoin the team next Wednesday. [AP/NEWSIS]

It was not until the July 8 game against the San Diego Padres that Ryu threw his first major league pitch in two years. During his return assignment against the Padres, Ryu tossed for 4 2/3 innings and allowed six earned runs.

“After he threw his pen, it just kind of flared up, so we had to put him on the disabled list,” Dodgers manager Dave Roberts said. “There’s really no timetable for him to pick up a ball or return.”

According to ESPN, Ryu’s injury is not serious. “He reportedly had an MRI in recent days that did not show anything significant,” the report said.

It is not yet clear when Ryu will return from this latest setback. The team has no set timetable for his return and said it will keep him out until discomfort in his left elbow disappears.

Ryu already had surgery on his left elbow in 2004 when he was in high school. He received what is called “Tommy John surgery,” a procedure in which the ulnar collateral ligament in the elbow is replaced with a tendon from other parts of the body.

The Orioles’ Kim was also placed on the disabled list on Wednesday, after sustaining a hamstring injury on July 11 while running to first base.

Kim initially thought he could avoid placement on the list.

“[The hamstring] feels much better than when I got injured,” Kim said earlier this week. “It feels great. If I could, I would want to play today, but this has to be agreed upon by the trainers. We’re talking with the trainers to make sure when will be the best time for me to come back.

I don’t exactly have a timetable now.”

Kim underwent rehab during the All-Star break. The outlook on his quick return looked positive as he was seen traveling with the team to road games, but the Orioles ultimately decided not to take any chances with the Korean outfielder.

“We’ve been playing short waiting on him, because he’s worth waiting on,” Orioles manager Buck Showalter told MLB.com. “You’re under the risk every time you’re out here testing it of a setback. It got to a point where it wasn’t making the improvements we hoped it would make.”

Kim’s poor performance during spring training almost decimated his first year in the MLB, as the team pressed him to step down to the minors. But Kim exercised his contractual right to refuse demotion and remained in the Orioles’ major league roster.

Kim initially did not see much playing time early in the season, and was even booed by home fans during games. His steady performance and ability to get to base, though, proved his worth and eventually turned fans around.

He eventually emerged as a starting outfielder for the Orioles and batted .329 with 11 runs batted in before the hamstring strain.

Kim will be eligible to play again starting on July 27.