A dearth of creativity

A dearth of creativity 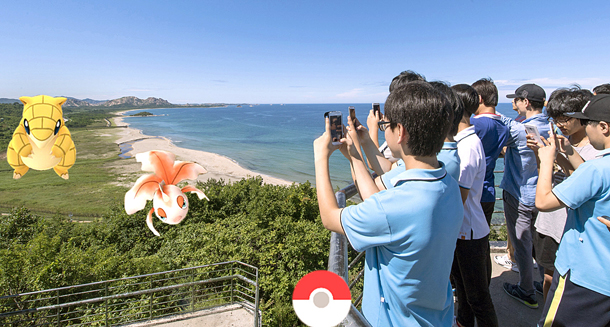 My old addiction to the legendary Pokémon was revived upon learning that a new augmented reality (AR) version could search and capture virtual creatures scattered in the real world with a smartphone. I was envious of the hunters flocking to Sokcho, where signals were strangely picked up despite a blockade in the location-based app service ahead of the game’s formal release in South Korea.

Pokémon trainers travel for one purpose — to capture and train rare creatures with supernatural powers to become a master in battles.

I looked up where the beasts can be found. Moltres, a legendary bird that revives itself by dipping in molten magma, lives in Kilauea Volcano in Hawaii. Articuno, also known as Freezer, is on top of the icy Mount Everest, and Thunder can be found in Venezuela’s Catatumbo River where lightning bolts are frequent. How good the Internet connection is atop Mount Everest is unknown. But still, I found myself eagerly looking up the locations.


’80s and ’90s kids grew up with Pokémon. Parents and kids both collected the cards, learned the abilities and mimicked angry Pikachu. First-generation trainers in the anime caught the beast with balls while today’s swipe their phones.

The phone that’s always in our hands has gained another function. It has become a tool to catch, breed, train, and battle digital creatures for sport. They have come out of their console sets and live among us. The adorable creatures have never been so real and fun.

But our response to this game and phenomenon can hardly be called fun. The media are reproachful about why our industry has failed to come up with such an idea and examined the status quo of patents on augmented reality and budgets for development. The government is under fire for outdated policy and ruining the industry with myriad regulations. There are calls for more investment and policy attention in AR, predicting it would be four times larger than the virtual reality market. The government trotted out measures that would include easing curfews on online gaming for minors.

Is such a response normal? It is true that our AR technology lags. But it is not true that the local industry cannot make an AR game like Pokémon Go. There already was a similar game called Olle Catch Catch. The technology does not seem to be a problem as the local industry is reportedly working to release a similar version of the game featuring the Pororo characters that are popular with Korean kids.

So why has the industry and policies been more titled toward VR instead of AR in Korea? AR does not require new devices, while VR needs special gadgets such as eyewear. Policymakers believe Korea, whose economy relies on large manufacturers, has a better chance in the VR sector. Although software is stressed, policies still favor hardware.

The fact that the industry can think only of Pororo characters for AR adaptation underscores how barren Korea is in intangible intellectual assets. Software and content has been regarded as cheap and less worthy. But we become all envious when a game made in another country becomes a blockbuster hit.

Pokémon GO has become a social and cultural phenomenon because it is built on a storyline many already know and enjoy. Copycat versions with different characters likely won’t be as successful.

Korea has been hyped about fostering the 3D industry after the blockbuster movie “Avatar.” But it has made little progress. The country not only lacks intellectual properties and AR technology, but also creativity.

Korea is relatively rich in content. We do not have globally popular anime characters like Pokémon, but we have Hallyu stars like Kim Soo-hyun and Song Joong-ki. But we lack the creativity to turn them into marketable content. If AlphaGo raised awareness on artificial intelligence, the Pokémon Go phenomenon let Koreans know that AR can be enjoyed and applied to change our everyday lives.