Why terrorists succeed in France

Why terrorists succeed in France 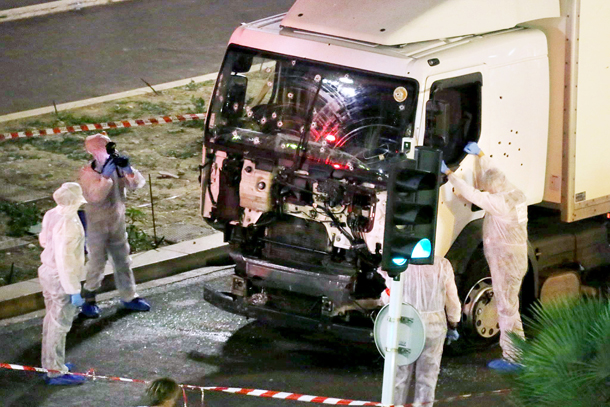 Authorities investigate a truck after it plowed through Bastille Day revelers in the French resort city of Nice, France, July 14, 2016. [AP/NEWSIS]

France is in the line of fire. Of the 16 terrorist incidents that took place in Western nations this year, five were in France, including the deadliest one — Thursday’s apparent lone wolf attack in Nice, which killed at least 84 people.

A little more than a week before the attack, a commission set up by the French parliament gave its version of the reasons for France’s endangered state in a massive report. Apart from an objective threat the

country faces thanks to its colonial past and a failure to integrate North African immigrants, it also suffers from inadequate policing.

“All the French citizens who struck within the nation’s territory in 2015 were known, in one capacity or another, to judicial, penal or intelligence services,” the report says. “They have all been on file, watched, listened to or incarcerated along their path of delinquency toward violent radicalization.”

As in the case of Orlando shooter Omar Mateen, the French security services watched several of the terrorists who later committed the worst attacks of 2015 — such as the Kouachi brothers, who massacred the staff of satirical weekly Charlie Hebdo. They failed to put any surveillance on Amedy Coulibaly who took hostages in Paris directly after that attack. Samy Amimour, who last November fired into a crowd of concertgoers in Paris, had traveled to Syria, had been questioned and placed under administrative surveillance; but nothing was done after he missed several weekly checks in a row, and a lack of coordination between police and intelligence services made sure he wasn’t tracked. Another shooter from the Bataclan theater, Omar Mostefai, had been identified to the French authorities by Turkish intelligence as a dangerous radical. He wasn’t watched either.

The list goes on. It’s not that the French security agencies lacked the resources to watch the suspected terrorists: According to the report, in 2015 the French security services had a quota for 2,700 people whose communications could be intercepted, but actual monitoring never even approached that number.

French law enforcement agencies have prevented nine terror attacks since the beginning of 2015, mostly by watching known suspects with Islamic State sympathies, but they have missed too many others. The French law enforcement bureaucracy is in a permanent state of reform, but the services still often work in their own silos. For example, there is a cooperation gap between the gendarmerie, which polices rural France, and domestic intelligence. Many of the future terrorists are radicalized in the French prisons, but only a “prison intelligence” force of 114 people is supposed to monitor such developments in a prison population of 68,000 and among 235,000 parolees.

Reportedly, 60 percent of French prisoners are Muslims, compared with 8 percent of France’s total population. France has a well-known problem with integrating its Muslim community: It is afflicted with high unemployment and concentrated in ghettos on the edge of big cities, breeding grounds for all kinds of crime. Youths with a criminal record are excellent material for radicalization: It gives them a cause for which to fight. And yet the French government barely has a system for tracking this risk group’s embrace of radical Islam.

That’s how French law enforcement missed the 31-year-old Tunisian-born resident of Nice who drove a rented heavy truck into a crowd of revelers on Nice’s Promenade des Anglais on Thursday. Like other French terrorists before him, he was known to the police for various petty acts of violence, yet he was never investigated for terrorist leanings or connections. The parliamentary commission made 40 proposals aimed at boosting France’s capacity to fight terrorism. They range from simple measures like more target practice for cops — something that might have prevented the Nice truck driver from plowing through the crowds — to the establishment of a stronger prison intelligence service and better coordination of anti-terrorist activities.

That won’t remove the problems at the root of all the French attacks — the hostility between the Muslim community and much of the rest of France and the globalization of terror, which makes France a convenient target because of the linguistic and cultural heritage it left in its former colonies. “We must no longer think in terms of French or French-resident people, but in terms of francophones,” Patrick Calvar, head of France’s domestic intelligence, told the commission. “Thousands of Tunisians, thousands of Moroccans and Algerians can be dispatched into our territory.”

These problems cannot be easily fixed, though. They are probably impossible to resolve in our lifetime because they were many decades in the making. All France can do in the short term is to improve policing, make it smarter and make sure signals don’t get crossed or extinguished in the bureaucracy.

The French government realizes that, and it’s getting reasonable advice, but while the bureaucratic wheels turn and big structures reform themselves, more attackers slip through the net.


*The author is a Bloomberg View columnist. He is a Berlin-based writer, author of three novels and two nonfiction books.