Despite being off season, illegal Chinese boats abound

Despite being off season, illegal Chinese boats abound 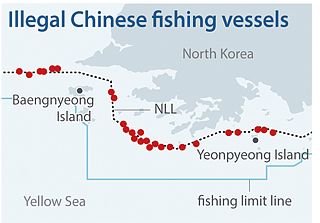 Despite being in the middle of the three-month-long fishing off-season, Korea’s western waters are still infested with illegal Chinese fishing vessels near the Northern Limit Line (NLL).

The Korean Coast Guard last month launched a large crack down on illegal Chinese fishing vessels operating in its waters, including near the NLL, the de facto maritime border between the two Koreas in the Yellow Sea.

While blue crab season has officially closed over the summer - hence Korean fishing vessels are not allowed to operate, nor even set sail for the next two months - Chinese fishers are still taking liberalities in Korean waters.

According to the Incheon Coast Guard on Wednesday, as of 7 a.m. there were 67 fishing vessels presumed to be Chinese illegally operating in waters near the NLL.

On average, there have been around 70 illegal vessels operating in Korean waters since the beginning of the month, though this is less than the roughly 300 boats that were found at the beginning of last month.

However, this number is up from last year during the same period, when there were around 40 to 50 Chinese fishing vessels.

Having a closed season is necessary to preserve natural resources and protect young crabs or other fish. Depending on the species or waters, the off-season period may differ, but usually they span around two months from June to August. Catching blue crab in the Yellow Sea area is banned from July through August.

Infringing upon Korea’s fishery resource management law can result in up to two years of imprisonment or a fine of up to 20 million won ($17,524).

Fishing vessels can also face a ban of up to 40 days for departing from ports. China’s fishing off-season likewise generally spans from the start of June to Sept. 1, though there are some exceptions based on the fish species and which waters.

The Chinese government punishes vessels that violate the fishing ban, fining them between 18 and 90 million won. Incheon Coast Guard officials speculate that these Chinese fishing vessels spend between two to three months in these waters near the NLL during China’s off-season to avoid such fines.

Park Tae-won, 56, who heads a coalition of Yeonpyeong Island fishermen, said, “Chinese fishing vessels skulk around yearlong, not just during off-season, operating illegally. There needs to be a maritime guard installed here so that the Coast Guard can stay all year round.”