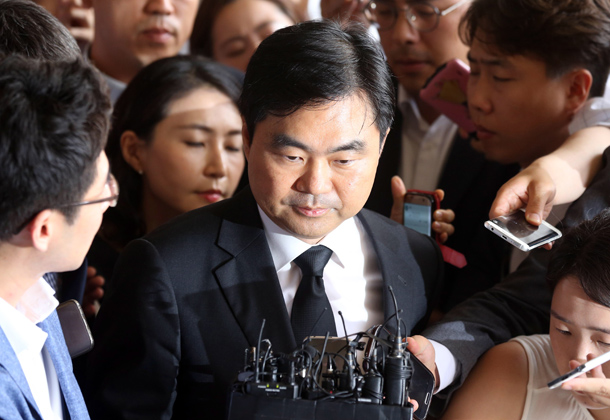 Senior prosecutor Jin Kyung-joon, who is under suspicion for taking bribes, is surrounded by reporters before being summoned to the Seocho District Prosecutors’ Office. [KIM SANG-SEON]

Around 1990, the Japanese comics series Dragon Ball was immensely popular. Protagonist Goku sets out on an adventure to find seven Dragon Balls that will grant his wish. He beats a series of monsters and becomes stronger. The story was quite addictive, and children had to wait a while to check out the comic book from the local comic book rental shops.

About 10 years later, the Dragon Ball series had been replaced by Pokémon. I glanced at the animation, and the general plot was not much different from Dragon Ball. The protagonist would catch a monster and train it to beat an enemy, only to be confronted by a stronger monster. The process is repeated hundreds of times.

The repetition may sound boring, but it is popular because many find it interesting. People enjoy competition. It is satisfying to have a stronger character and defeat the enemy. Starcraft, Lineage and League of Legends have the same elements. Pokémon Go just took it a step further. The game has been taken from the room to the world, and instead of a keyboard and fingers, users walk around with a smartphone. Augmented reality makes the game more gratifying and real.

The Pokémon Go craze is positive as it creates pleasure without taking things from others. There is an unlimited supply of cute characters. When users grow tired of characters, new, more powerful characters can be created. The psychological values of fun and pleasure are supplied indefinitely. Countless users can compete and enjoy infinite challenges. Sokcho, Gangwon, the only place where the game is available in Korea, has become a popular destination, and the game creates considerable economic value.

However, in reality, things are the opposite. It is a game of pursuing unjustified things unjustly. Senior prosecutor Jin Kyung-joon had the most prestigious educational background and power. He greedily sought economic wealth as well as honor as a prosecutor. After he was arrested on charges that he took millions of dollars in bribes from the owner of the game maker Nexon, he tried to deceive the public. If public servants weren’t required to disclose their assets, I wonder how far his corruption would have gone beyond getting stocks and a car and granting his brother-in-law a business deal.

He may have thought that receiving stocks from his friend wasn’t a big deal. However, unlike computer games, the opportunities and resources in reality are limited. If he gets more, someone has to end up with less. That someone may be the shareholders, workers or the company itself. A public servant is expected to maintain fairness and equity. He tainted the dignity of public service. The majority of hard-working citizens feel dispirited. The margin of decline in social and economic value is greater than the benefits he enjoyed. He knew this all along, and that’s why his infinite challenge deserves severe criticism.

Hopefully, he is the only corrupt high-level public servant. But considering the conduct of former education ministry policy planning chief Na Hyang-wook, I cannot shake off the ominous feeling that there are potentially more of them. When Na said, “99 percent of the people are like dogs and pigs” and the “class system should become fixed,” he believed belonged to the top 1 percent. If he is pushed out of the top 1 percent, will he move to the 99 percent obediently? He may begin his infinite challenge like Jin Kyung-joon.

Jin was a first-grade and Na was a second-grade civil servant. There are only about 1,500 of them. They are less than 0.2 percent of the over 1 million civil servants, and many of them make six figures. They have considerable power, honor and wealth already. These are the benefits that the citizens allow them to handle state affairs. We are not asking them to devote their life to the job but want them to at least fulfill their duties fairly.

On July 27, 1996, Jin, then a prosecutor at the criminal department of the Seoul Prosecutors Office, indicted a man who sold a 6,000 won ($5.30) train ticket for 10,000 won. He was not even a scalper, and when a reporter asked why he went for an unprecedented arrest, Jin said, “Selling an illegal ticket is a bad crime exploiting the psychology of the travelers to take an unfair profit. I had the accused arrested and charged in order to warn the scalpers before vacation season.” Twenty years later, Jin’s scandal is a far more serious and solemn warning to high-level officials.