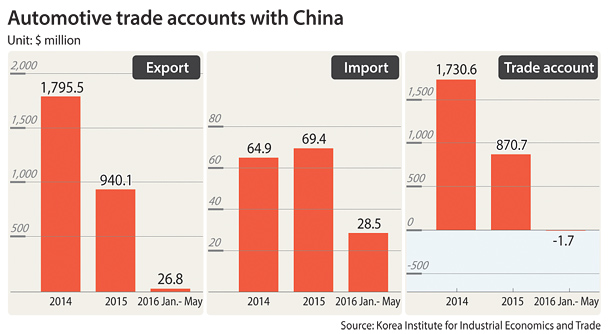 Are Korean automobile exports to China struggling? According to a report from the Korea Institute for Industrial Economics and Trade on Thursday, the Korean automotive industry’s trade account with China for the first time reported a deficit in the first five months of this year.

That means that there were fewer cars that were manufactured in Korean plants exported to China than cars built in China shipped to Korea.

The deficit caused by the difference in exports and those imported from China amounted to $1.7 million. This is a figure only for completely built units (CBUs). Trade with China on automobiles has been rapidly shrinking in recent years. In 2014 the trade surplus was $1.73 billion, which plummeted to $870 million last year.

This was largely contributed to the sharp drop in exports. In 2014 Korean automobiles exported to China amounted to nearly $1.8 billion. Last year it was halved to $940 million. Between January and May, $26.8 million worth of Korean automobiles were shipped to China, a 93.7 percent nosedive from the same period a year ago while CBU import from China rose 9.9 percent.

The institute’s report, however, noted that the significant drop in Korean cars exported to China is not because Chinese consumers are not buying cars made from Korea. Instead, it is the result of Korean companies expanding their vehicle productions at plants in China.

Hyundai Motor currently has the largest production of automobiles in China among Korean automakers. It currently operates three plans and is constructing two additional plants in Cangzhou in Hebei province, eastern China, and Chongqing, southwest China.

Hyundai has been increasing its production of its vehicles at its plants in the neighboring country. In 2010, production of the Korean automaker’s cars for the first time reached 1 million units; it is 1.7 million units today. As a result, vehicles manufactured from Korea that are shipped to China now account for less than 10 percent of its overall exports. The CBU exported to China in the first five months of this year were 115 units. That’s a 96.3 percent plunge compared to the same period last year. Hyundai affiliate Kia Motors also has reduced CBU exports. Kia shipped 593 units between January and May, a 93.5 percent fall.

Other Korean companies are also making similar changes. Renault Samsung this year exported 401 units of its vehicles. That’s a sharp drop from the 35,000 units it exported in 2014. This was largely because the automaker’s mother company Renault Group created a joint venture with China’s Dongfeng in 2013. Dongfeng Renault opened its first production plant earlier this year.

Korean automakers have been increasing production in China largely because of the high custom taxes on imports, which are 22.5 percent. Another threat is the growing brand recognition of Chinese automakers.

“In China by brand power Korea ranks after Germany and Japan,” said Kim Kyung-yoo, a researcher with the Korea Institute for Industrial Economics and Trade. “But the Korean companies are the ones that are most hurt from the thriving Chinese companies.”