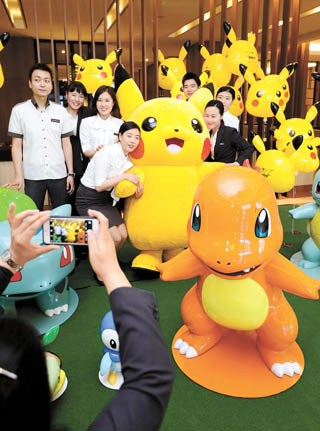 Employees of the Haeundae Grand Hotel stop by a Pokemon photo zone set up on the ground floor of the hotel in Busan on Thursday. The hotel launched a Pokemon marketing campaign in cooperation with Pokemon Korea, filling suites with character replicas and offering limited-edition gifts and a restaurant menu related to the popular brand. Although the augmented reality game Pokemon Go has yet to begin service in Korea, some local gamers discovered the app works in parts of Gangwon and Busan, causing fans to rush to those regions to play the game. [NEWSIS]