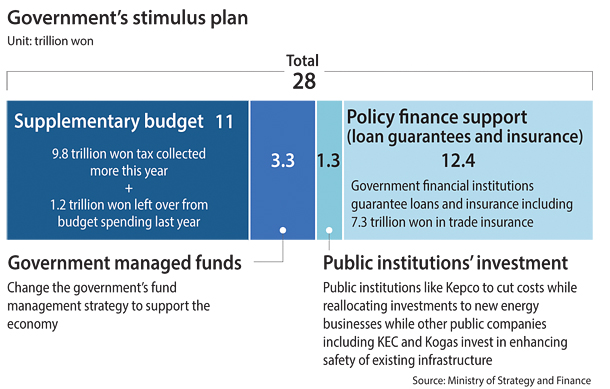 A 28 trillion won ($24.6 billion) economic stimulus package, which includes a 11 trillion won supplementary budget, will be largely spent on corporate restructuring and stabilizing the livelihoods of the middle and lower income classes, including creating jobs to ameliorate layoffs brought about by restructuring.

The government emphasized it will not spend on large-scale infrastructure projects, referred to as social overhead capital (SOC).

The government also stressed that the stimulus package - and particularly the supplementary budget - will be financed by taxes it has already collected this year as well as the unspent tax collections from last year. The goal is to finance economic growth without increasing government debt, including issuing of treasury bonds. 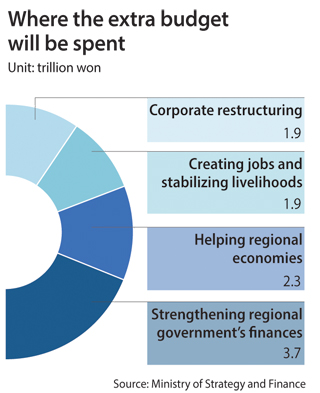 The Ministry of Strategy and Finance recently lowered its economic growth forecast for this year from 3.1 percent to 2.8 percent. The lowered figure includes the expected contributions by the financial stimulus package.

“Due to uncertainties at home and abroad including Brexit and our corporate restructuring, our economy now stands at a crossroads,” said Deputy Prime Minister for the Economy and Finance Minister Yoo Il-ho on Friday at a government press conference in Seoul.

“Recently the IMF lowered its global economic growth outlook due to Brexit, and at home the recovery in the private sector is not strong enough.

“The government sees this as the right time to aggressively counter the situation as our growth engine will weaken if we miss this opportunity.”

The finance minister requested that the National Assembly swiftly pass the supplementary budget, adding that it would change the fundamental structure of Korea’s economy by allowing it to be driven by new growth engines like virtual reality and biopharmaceuticals.

This is the third supplementary budget under the Park Geun-hye administration. The first was in 2013 and the second was in 2015.

Small and midsize shipbuilding companies will receive 100 billion won to build some 61 new ships for public use, such as those used by the navy and maritime police.

Another 1.9 trillion won will be used to create jobs and stabilize the labor market in the restructuring aftermath.

The government also plans to give financial support to corporations going through restructuring to help them keep essential employees. Those who are laid off but are well-trained will get the government’s support for finding new jobs in related fields. Laid-off workers who are relatively less trained can apply for the government-run job training program to find new jobs in other industries.

“The government’s plan is to minimize problems coming from the shipbuilding restructuring, but it appears that there is not enough money going to be used in this matter,” said Kim Yong-goo, an analyst at Hana Financial Investment. “I am not sure if this budget will actually help the shipbuilding industry or the economy in general. If they wanted to focus on shipbuilding, they should have allocated more money to this sector.”

The government’s goal is to spend 400 billion won to create 36,000 jobs for young people by injecting money into newly growing sectors such as virtual reality content and the game industry. Furthermore, 100 billion won will be used for those considered to be disadvantaged, such as seniors and low-income earners. Even though the new jobs for seniors will be temporary, the government plans to create some 20,000 of them.

Another 2.3 trillion won will be used for vitalizing regional economies. The government’s plan is to create more tourist attractions and improve conditions for old reservoirs in rural regions.

The government also plans to develop the tourism industry in regions where the shipbuilding industry was concentrated. It will also give financial support to small and midsize companies and small businesses in rural regions.

Additionally, 3.7 trillion won will be injected into regional governments.

“Tax collection for the first five months of this year was at least 19 trillion won more than the previous year,” said Ahn Taek-soon, a deputy director general at the Finance Ministry. “We have decided to [only] use 9.8 trillion won of the total as uncertainties appear to remain in the second half of this year.”

However, some experts said the supplementary budget should be larger.

“Technically speaking, the supplementary budget does help the economy grow for sure, but I think the government has to come up with at least 15 to 20 trillion won in order to meet its goal,” said Kim Yoo-kyeom, an economist at LIG Investment & Securities. “If they were going to execute the budget, I believe they should have done it on a large-scale to actually see positive results since they can’t come up with a supplementary budget every time they want.”

He added that 15 to 20 trillion won is about 1 percent of Korea’s GDP and said this amount is needed to raise the growth rate by 0.2 percentage points.

The budget was reviewed at a Cabinet meeting on Friday and will be sent to the National Assembly for approval on Tuesday.