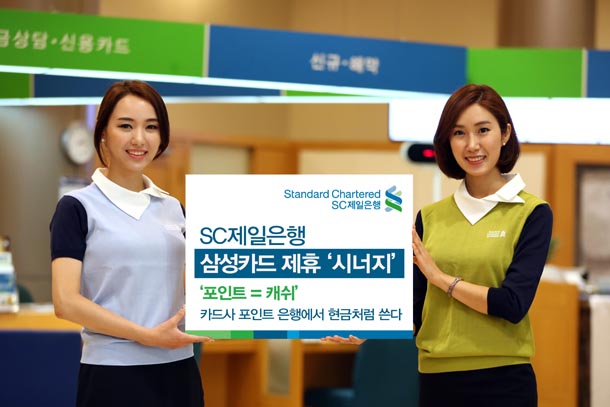 Standard Chartered Korea employees promote partnership between the bank and Samsung Card, which launched seven credit cards with features including cashback benefits for both SC and Samsung Card customers, at the bank’s headquarters in central Seoul. [STANDARD CHARTERED KOREA]

Standard Chartered Korea, which for years was rumored to be pulling out of the Korean market, is now demonstrating its efforts to stay rooted at home by reaching consumers through various channels.

The London-based bank is joining hands with local card and retail businesses to connect with consumers, and its efforts are bearing fruit.

The partnership made between the bank and Samsung Card in February, the first of its kind in the financial industry, is a good example that is proving to be a win-win situation for both the companies and their customers.

The cards can be issued at all SC branches and on the homepage of Samsung Card. The number of card issuances is not available to the public yet.

A major advantage for consumers is that they can use Samsung Card points as cash at the bank.

Furthermore, bank customers who use the Samsung Cards can deal with card issuance or payment issues face-to-face with bankers at all SC branches, unlike ordinary cards where users have to rely on card sales agents via telephone or Internet.

“SC Bank and Samsung Card are winning synergy effects from the partnership,” said Patrick Yoon, vice president for retail finance at the bank. “We will provide a greater variety of partnered products in the near future.”

SC Bank has been operating on a deficit due to falling profitability for the past few years, and even changed its name in April to re-include its old Korean name “Cheil” in order to perk up its retail business.

The bank’s localization efforts are being made in the fintech area, too.

In June, the bank formed ties with NHN Entertainment, a game service company spun off from Naver Corporation, to connect SC bank accounts with Payco, a simple remittance service. The service charges no additional fee for money transfer and does not require security card numbers or one-time passwords.

It just needs a six-digit password. When a sender doesn’t have the account number of a receiver, the sender can just type in the receiver’s mobile phone number.

SC Bank’s reward points can be interchanged with Payco points that can be used for various discounts.

“It was the first strategic partnership between a bank and mobile financial product,” said Kim Chong-hoon, head of digital banking at SC. “To provide our customers with specialized mobile financial services, we will increase cooperation with Payco.”