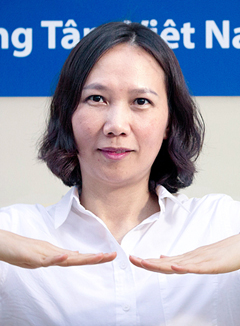 Won Ok-keum is busy answering phone calls. She talks to the callers in both Vietnamese and Korean.

Most of the people on the phone are laborers or wives from Vietnam seeking legal help.

Won was born Nguyen Ngo Cam in Vietnam. As an adult, she worked as an English interpreter. Her husband worked for a construction company and was dispatched to Vietnam, where the two met.

They discovered they had more in common than most people could imagine: her husband is a descendant of the Hwasan Lee clan, whose ancestors moved to the Korean Peninsula in the 13th century from Vietnam. In effect, they were very distant relatives.

“Because my husband was of ethnic Vietnamese descent, I felt close to him and both families welcomed our marriage,” said Won.

The couple was married in 1997 and Won moved to Korea. She became a Korean citizen several years later, taking her Korean name. They settled in Namyangju, Gyeonggi, where they lived with her husband’s parents.

“At the time there were not a lot of multicultural families,” recalled Won. “As I lived with my in-laws, I made their friends my friends.”

Won slowly grew accustomed to Korean society. She learned Korean at the Center for Korean Language and Culture in Hankuk University of Foreign Studies. At the local community center, she learned cooking and did aerobics. She gave birth to a boy and a girl.

Her life in Korea took a new course as the number of Vietnamese women marrying Korean men increased. In 2004, the Vietnamese brides formed an online community called “Gatherings of Korea-Vietnam Families.”

“Women marrying Koreans and becoming naturalized citizens began increasing drastically,” said Won. “Miscommunication between the spouses was a serious problem. I first tried helping them out by volunteering to interpret - helping the Vietnamese brides and their husbands convey their thoughts. But my workload increased so much that I couldn’t do it alone.”

Soon the phenomenon turned a corner and Vietnamese women were divorcing Korean men - and being deported against their will. Won decided she needed a whole new area of expertise.

“I wanted to help them properly by learning Korea’s laws,” said Won.

Won entered Korea National Open University’s department of law in 2006. After she graduated with a bachelor’s degree, she started volunteering at a center for immigrants in Guri, Gyeonggi.

Even though she did not take the national bar exam or any paralegal license exam, she could give advice about problems that immigrants and foreign laborers face.

She’s now a leader of the Vietnamese community in Korea and runs a Vietnamese translation center.

“There are many foreign laborers who work in dangerous conditions but don’t get their wages and are even violently abused by their employers,” said Won. “These people, despite such abhorrent treatment, can’t freely change their jobs due to policies that deport migrant laborers who change their workplaces more than three times.”

Her legal expertise and fluent Korean is a great help to foreign laborers and Vietnamese wives in Korea. Won negotiates on behalf of workers complaining about bad working conditions.

She visits foreign workers at hospitals after they are injured on the job. When negotiating, Won tries to come up with the best deal for the foreign workers and migrant brides from her mother country.

One of her cases involved a Vietnamese woman who came to Korea after her marriage was arranged by a broker. She didn’t know that her husband suffered from a level-three intellectual disability. Through nine years of marriage, the woman was frequently abused by her in-laws.

She was eventually thrown out of the house by her father-in-law. When she tried to claim her possessions, he gave her a bag with her clothes inside. All the clothes were all ripped into pieces.

With the help of Won and a Korean attorney, the abused wife was able to divorce her husband and receive 5 million won in compensation from her in-laws. The two helped her stay in Korea and meet her child twice a month.

“She was very kind,” said Won. “She didn’t want her father-in-law to be punished. She wanted nothing but to be able to meet her child regularly.”

“I want to help Vietnamese migrants who are maltreated until the Korean and Vietnamese people can coexist in harmony,” she said. “It must have been baffling for the Korean people to embrace so many foreigners in such a short time. Korea, however, is still not ready for a multicultural society, and it makes me sad that antagonisms toward immigrants is rising still.”