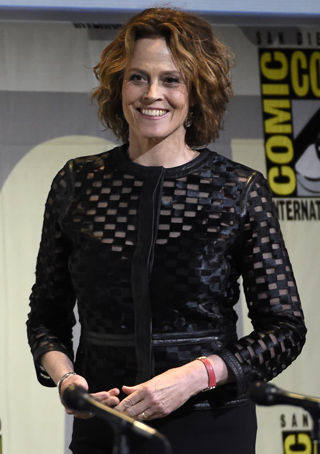 The original star of the “Alien” film franchise says she’s hopeful about reprising her role as tough-as-nails survivor Ellen Ripley in another sequel.

Weaver told the crowd at San Diego Comic-Con International during a Saturday panel celebrating the 30th anniversary of the sci-fi sequel “Aliens” that “District 9” filmmaker Neill Blomkamp pitched her an idea for another installment when they were working together on his 2015 film “Chappie.”

“Four months later, I got a script that was so amazing and gives the fans everything they are looking for - plus innovates in a lot of ways,” said Weaver.

The actress, who will soon begin production on filmmaker James Cameron’s “Avatar” sequels, isn’t sure when they would work on the project. “Alien” director Ridley Scott is currently crafting a “Prometheus” sequel titled “Alien: Covenant.”

“[Blomkamp] has work to do, and I have work to do,” said Weaver. “I am hoping when we finish those jobs, we will circle back and start to do it.”

Weaver last portrayed Ripley on screen in the 1997 sequel “Alien Resurrection,” the fourth film in the series that ended with a clone of Ripley arriving on Earth. (The original Ripley sacrificed herself at the conclusion of 1992’s “Aliens 3.”)

Weaver told 6,500 fans at Comic-Con that she wasn’t interested in an Earth-set sequel because she thought “Earth was boring.”