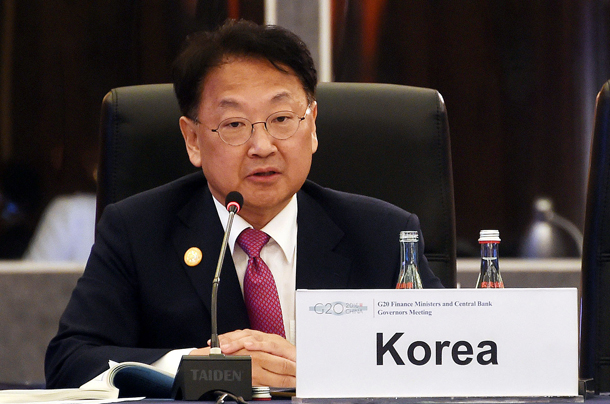 “An outright economic retaliation will be nearly impossible,” he said in regards to China’s negative reaction to the U.S. Thaad antimissile defense unit. “China is a member of the World Trade Organization and is in a free trade agreement [with South Korea.]”

“Whether you want it or not, economic relations is not something that lets you take revenge at will just because you feel bad about it. You should proceed with your business,” he went on to say, adding an “[all-out retaliation would have to mean] invading the [South Korean] territory.”

He spoke to the Korean press as he participated in the Group of 20 major economies meeting in China’s southwestern city of Chengdu. The minister was reiterating the South Korean government’s assumed minimal impact of China’s pressure on South Korea.

He made a similar comment on July 13 following a series of warnings and protest from Beijing against Seoul and Washington’s July 8 announcement that they would deploy the advanced missile-defense system.

“We believe that the deployment of the Thaad battery goes far beyond the defense need of the Korean peninsula. Any justification to this cannot hold water. We have every reason and right to question the real scheme behind this action,” Chinese Foreign Minister Wang Yi said on July 9. Two days later, Chinese Foreign Ministry spokesman Lu Kang said, “China strongly urges the United States and South Korea to halt the process,” adding “China will resolutely take relevant measures to protect our reasonable interests,” without elaborating on what “relevant measures” mean.

The defense shield is intended to squeeze North Korea but China fears the system’s radar would track its military capabilities as does Russia.

“China used to take non-tariff barriers [as a countermeasure against certain issues],” he said. “I am worried that the possibility of China doing so isn’t entirely nil. But the most desirable response [from Beijing] would be saying that Thaad and economic relations are a separate matter.”

Questioned on whether there has been progress in the negotiations between South Korea and China since April to extend their currency swap deal slated to expire next year, he said the proceeding has been as slow as “turtle’s steps.”