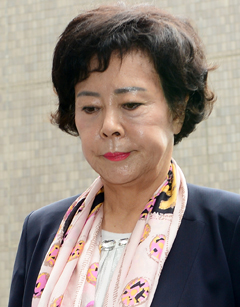 The executive director of Lotte Scholarship Foundation and eldest daughter of Lotte’s founder was indicted by prosecutors Tuesday on corporate malpractice and embezzlement charges, becoming the first member of the chaebol family to be formally accused by the state in the ongoing probe.

In order to recollect her criminal proceeds, prosecutors said they requested a court order to seize the apartment and land property belonging to the 74-year-old Shin Young-ja.

Authorities suspect Shin received bribes worth about 3 billion won ($2.6 million) from local companies in return for allowing them to open outlets in Lotte Duty Free and Lotte Department Store between February 2007 and May this year. In return for allowing the major cosmetics brand Nature Republic to open a store at a strategic location in Lotte Duty Free, Shin was said to have received three percent of the establishment’s sales in 2013 and 2014, which amounted to about 660 million won in total.

Shin also faces allegations of siphoning some 4 billion won from several other companies she helped manage, in part by enlisting her three daughters to the executive board and having the companies pay them money through bank accounts that bore their names. The financial transactions were disguised as their “salaries,” prosecutors said.

Shin has yet to admit to any of the charges, according to a senior prosecutor involved in the probe. She and some other Lotte workers who have been summoned so far share the fact that they have all refused to acknowledge their malpractices or apologize for committing them, the official continued, a “key difference Lotte seems to be showing between other companies.”

Shin, a major shareholder of several Lotte affiliates including Hotel Lotte and Lotte Shopping, is said to have earned nearly 6 billion won in salaries last year and up to 50 billion won over the past decade.

The latest probe into Korea’s fifth-largest company dates back to early June, when nearly 200 investigators from the Supreme Prosecutors’ Office were mobilized for a massive raid on retail giant Lotte Group in a corporate embezzlement and business malpractice case.

Prosecutors said their main focus was whether the conglomerate created slush funds through financial transactions of its affiliates, and if so, where the money was funneled and to whom. The prosecution suspects money was pocketed by Lotte executives, an allegation that has yet to be fully proved.

Kee June, former CEO of Lotte Corporation as well as Lotte Chemical, has been detained since last Saturday for his alleged involvement in a major accounting fraud that earned the chemical company some 27 billion won in tax rebates from the government in 2006. Kee, who headed the company from 2004 to 2007, is accused of having masterminded the whole accounting fraud. Prosecutors said Tuesday that more of Kee’s close aides will likely be summoned this week for questioning.