Nam June Paik feted in a series of shows

Nam June Paik feted in a series of shows 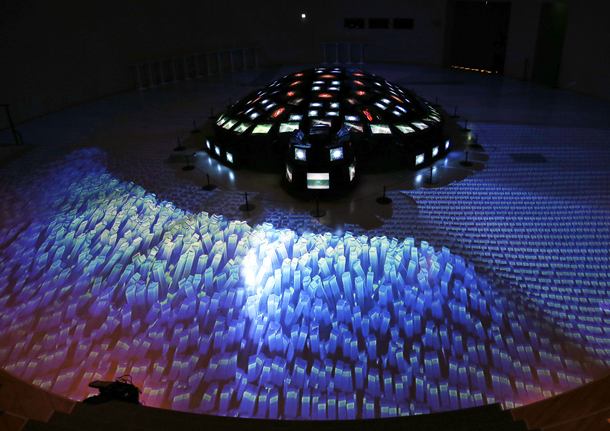 Nam June Paik’s 1993 work “Turtle” is on display at the “Paik Nam June Show,” held at Dongdaemun Design Plaza, located in Jung-gu, central Seoul. This video installation’s 10 meters (34 feet) of length is made up of 166 television monitors. D’strict, a digital performance team, made a video for the installation. [NEWSIS]

Nam June Paik is known as an artist whose avant-garde works never failed to surprise.

After he died in 2006, the New York Times called him an “aesthetic innovator,” someone who could transcend cultural barriers and always sought new inspiration.

Paik (1932-2006) was one of the few Korean artists whose name became a globally recognized brand, and who has found fame in the Western-oriented art world.

Ten years after his death, a streak of exhibits, events and releases are taking place in Korea that celebrate the cultural revolutionist, engineer, philosopher and scientist.

The exhibition explores different kinds of game art, and it includes new work by 34 teams of media artists and game designers, including Bill Viola and Jeffrey Shaw.

The first section pays homage to Paik, who is known as the father of video art, and it looks at the ways both his work and the philosophies behind it have inspired subsequent generations of media artists.

The exhibit will run until February next year.

“Nam June Paik ∞ Fluxus,” held at Seoul Museum of Art in Jung-gu, central Seoul, recalls the Fluxus artistic movement that appeared in the ’60s and included Paik for a time.

Video installations and performances are on display until the end of July.

The exhibit is free and offers three docent-led tours each day.

The exhibition includes interpretations of Paik’s work by artists like D’strict, a digital performance team that uses Paik’s masterpiece “Turtle” for a show.

It also features 100 pieces of Paik’s own art on display.

For those interested in reading more about Paik, the book “My Love, Nam June Paik” has been revised and is getting re-released to celebrate the 10th anniversary of the artist’s death. Written by journalist Nam Jung-ho, it features interviews with Paik’s wife, the media artist Shigeko Kubota.

Finally, a new memorial hall dedicated to Paik in Changsin-dong, Jongno District in central Seoul, is slated to open in November.

It’s a recreation of the hanok (Korean traditional house) in which he spent most of his childhood, and will be run by the Seoul Museum of Art.