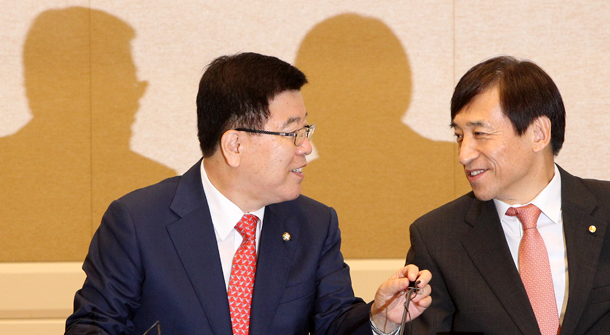 The head of Korea’s central bank emphasized the importance of government fiscal policy in restructuring efforts and noted the limits of monetary easing during a forum with lawmakers at the National Assembly in Yeouido, western Seoul, on Wednesday.

“Slow growth and low inflation are not temporary issues,” Bank of Korea (BOK) Gov. Lee Ju-yeol said. “To solve the problems, the role of fiscal policy and structural reform is more important than monetary policy.”

He made clear that repetitive cuts in interest rates to spur growth and domestic consumption are not an ideal approach.

“There is a limit that keeps Korea from lowering the rate down to zero,” Lee said. “[The BOK] also needs to have policy space and options to support the restructuring efforts.”

The remark’s intent appears to be countering criticism that the central bank has refrained from executing sufficient policy options to foster growth.

Back in June, the BOK took the market by surprise by lowering its benchmark rate to a record low of 1.25 percent.

Still, Lee said an excessive monetary easing policy could risk increasing the amount of sour assets in financial companies as well as household and corporate debt.

Lee instead called on the importance of enhancing productivity and the government’s prudence in undertaking structural overhauls.

“The injection of labor and capital has its own limit due to the aging population,” he said, “But to increase the potential growth rate, productivity should be restored.

The government and National Assembly should also lead restructuring to reduce inefficiency and ease unnecessary regulations.”

He also mentioned that Korea has enough fiscal space to cope with further economic slowdown due to sound financial conditions compared to other countries.

The International Monetary Fund (IMF) defines fiscal space as room in a government’s budget that allows it to provide resources for a desired purpose without jeopardizing the sustainability of its financial position.

Korea’s fiscal space stood at 241.1 percent, the second highest after Norway among 11 countries, according to a 2014 IMF report quoted by Lee.

Behind Korea were the United States, United Kingdom and France.