Consumer sentiment was positive in July

Consumer sentiment was positive in July 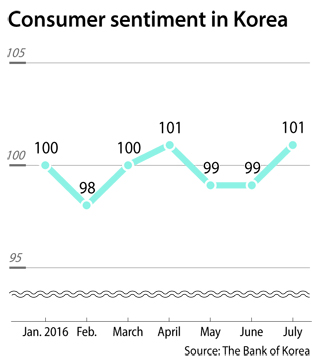 Consumer confidence in the Korean economy improved in July, thanks to eased concerns over external factors including Britain’s decision to leave the European Union, central bank data showed Wednesday.

The composite consumer sentiment index (CCSI) stood at 101 in July, up two points from the previous month, according to the Bank of Korea (BOK).

A reading above 100 points indicates the majority of survey participants maintain a positive outlook on the national economy, while a reading below 100 indicates a negative view.

Consumer sentiment had remained pessimistic in the two previous months, with the index at 99, but the July outcome represents a rebound from the negative sentiment.

The BOK attributed the slight uptick to softened fears about the so-called Brexit and optimistic expectations for the government’s fiscal stimulus and monetary easing plan.

“As worries over Brexit receded, the Kospi climbed and the downturn in exports also slowed,” said Joo Sung-jae, head of the statistics department at the BOK.

“Along with that, expectations of expansionary macroeconomic policies also weighed in,” Joo said.

The government is hoping the financial stimulus will help raise economic growth for this year between 0.1 and 0.2 percentage points.

The funds will go toward corporate restructuring and creating jobs to account for the layoffs brought on by restructuring.

The BOK survey found sentiment on household finances remained pessimistic, matching the previous month’s 91. But in terms of future prospects for household finances and household income, the index rose by two points to register 98 and 100 each, suggesting consumers are optimistic about the future.