Land values up 1.25% on development boom

Land values up 1.25% on development boom 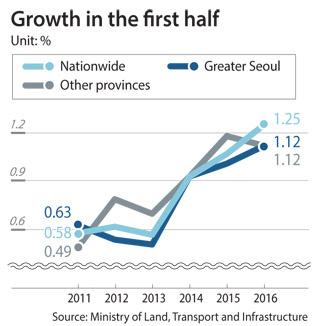 Land values have risen in the first half, continuing a streak that started in late 2010 largely thanks to growing expectations over development projects resulting from the central bank’s loose monetary policy.

According to the Ministry of Land, Transport and Infrastructure, land values in the first half of this year grew 1.25 percent compared to the previous year. In 2015, land value moved up 1.07 percent in the first six months.

Values in other regions outside of greater Seoul grew faster than Seoul, Gyeonggi and Incheon combined. Land value in provincial areas grew 1.48 percent in the first half, sharper than last year’s 1.18 percent. Greater Seoul’s land value also grew sharper than that of last year although as not as sharp as the other regions outside of Seoul at 1.12 percent from last year’s 1.01 percent.

Seoul was the biggest contributor to the growth in the region. Seoul’s land value grew 1.34 percent in the first half whereas Gyeonggi’s value was up 0.95 percent and Incheon’s 0.82 percent, lower than the nation’s average. Seoul’s land value has been on an upward tick since September 2013. Recently major redevelopment projects in Seoul have kicked off particularly in Gangnam, southern Seoul, where there is high demand, helping boost land values.

Outside of the Seoul region, Jeju saw the biggest year-on-year surge of 5.71 percent. Land value on the southern islet of the peninsula was the result of the government announcing the development of a second airport late last year. In fact, Seogwipo, near the site of where the second international airport will be constructed, saw land value increase more than 6 percent. 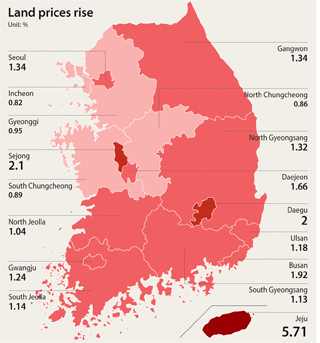 Sejong, the nation’s government administrative city, followed Jeju as the major region that enjoyed a marked increase in its land value, rising 2.1 percent, followed by Daegu, which saw a 2 percent rise.

But active land trading was down in the first half, in which 1.41 million lands covering an area of 1,102.6 square kilometers (435 square miles), were traded. That’s an 8.1 percent drop from the same period last year when land transactions hit a record. When compared to the second half of last year, land transactions dropped 9.5 percent.

Gangwon, North Chungcheong, and Jeju were the only places that saw land transactions rise compared to a year ago while other areas saw a sharp decline. Gangwon saw the largest increase of 24.1 percent followed by Jeju with 12.8 percent. North Chungcheong values rose 6.5 percent.

On the contrary, land transactions in Sejong plummeted, falling nearly 40 percent followed by Daegu with 35 percent and Gwangju with 33.5 percent. Even Seoul fell 8.6 percent.

“Overall land transactions have shrunk compared to a year ago as housing transactions lately have retreated as well,” said an official at the land ministry. “However, land values continued to move upwards on the back of growing expectations of development projects resulting from low interest rates.”