Beijing and Washington square off during ARF

Beijing and Washington square off during ARF 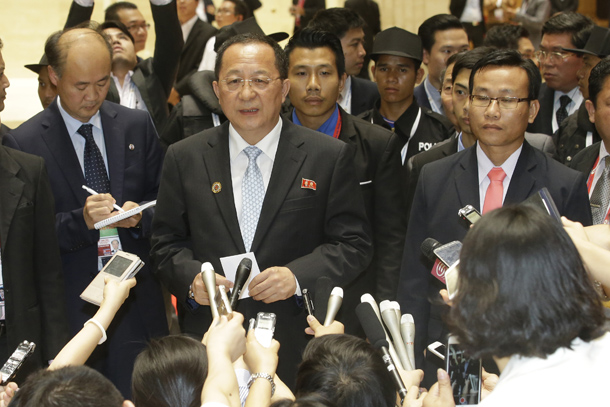 North Korea Foreign Minister Ri Yong-ho talks to a reporter on Tuesday after a break during the 23rd Asean Regional Forum in Vientiane, Laos. [AP/NEWSIS]

VIENTIANE, Laos - As an indicator of the growing schism between Beijing and Washington, foreign ministers clashed at a regional forum in Vientiane, Laos, over the South China Sea dispute and the deployment of a U.S.-led antiballistic missile system in Korea.

Top diplomats came with different agendas to the Association of Southeast Asian Nations meeting, which culminated in the Asean Regional Forum (ARF) on Tuesday, closing with ministers unable to agree on a unified annual chairman’s statement.

Foreign ministers on Tuesday during the ARF meeting were especially stuck on a clause in a draft statement pushed by China stating some minister’s concern over the decision this month to deploy the Terminal High Altitude Area Defense (Thaad) system to South Korea, which Beijing, Moscow and Pyongyang oppose.

Observers pointed out that an ARF chairman’s declaration, which includes a clause expressing concern over Thaad, could undermine Seoul’s efforts to persuade Pyongyang to denuclearize and impede the faithful implementation of sanctions against the North.

South Korean Minister of Foreign Affairs Yun Byung-se said in his opening remarks that “a unified message warning against North Korea” for its nuclear and missile provocations is needed. He also called for the faithful implementation of the UN Security Council resolution imposing sanctions against Pyongyang for its fourth nuclear test and long-range missile launch.

Yun added, “Since its nuclear test in January, North Korea has launched 15 missiles and its threats are more frequent and severe than at any time before. It has made it clear it will attack us, so we need to send a strong message to North Korea.”

“Whether we conduct additional nuclear tests depends on the United States,” he said, adding it was Washington that “compromised the possibility of denuclearization on the Korean Peninsula.”

Ri was also bitter about Washington’s first human rights sanctions on Pyongyang, which included North Korean leader Kim Jong-un in the U.S. Department of Treasury’s blacklist for the first time, as well was the decision to deploy Thaad in the South.

Chinese Foreign Minister Wang Yi, in bilateral talks with Korean Foreign Minister Yun Byung-se, said that the decision by Seoul and Washington to deploy a Thaad battery to South Korea undermined the foundation of trust between the two countries.

Another key issue contested by participants was the recent landmark ruling on the South China Sea dispute by an international tribunal in The Hague earlier this month, which sided with the Philippines and denied most of Beijing’s claims over the waters.

China immediately rejected this landmark ruling, which Washington supported. Seoul has especially been careful to remain neutral on the issue.

Yun arrived in Laos on Sunday to attend a series of Asean-related meetings, including the East Asia Summit, a meeting of foreign ministers of Asean plus three countries - South Korea, China and Japan - and the ARF, along with bilateral meetings with his counterparts from countries including Japan, China, the United States and Myanmar.

The 23rd ARF chairman’s statement was belatedly released more than a day later without including the controversial clause expressing concerns over the deployment of the Thaad system in South Korea. On Pyongyang, the statement expressed concern over the Jan. 6 nuclear test and ballistic missile launches and added that “most ministers” urged North Korea to comply with all relevant UN Security Council resolutions.