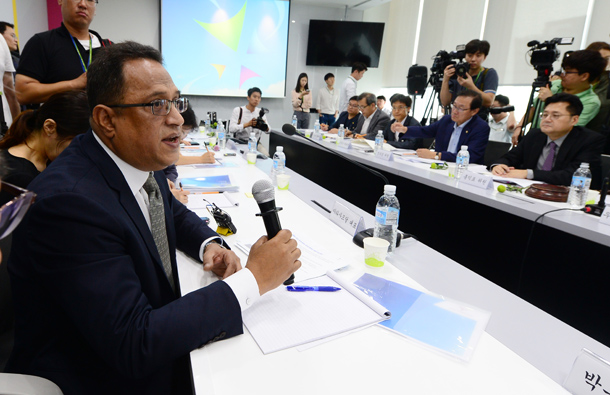 SK Chemical has maintained the chemical polyhexamethylene guanidine (PHMG), which allegedly sickened hundreds of Koreans and led to many deaths when used in humidifier sterilizers, was harmless to humans as early as 1999, according to a National Assembly committee.

The sterilizer scandal began when sterilizer manufacturers bought the compound PHMG and other fatal chemicals from suppliers like SK Chemical and used them in humidifier sterilizers without thoroughly checking their inhalation toxicity.

SK Chemical was one of the companies supplying PHMG, and Oxy Reckitt Benckiser was a manufacturer that used the compound in its humidifier sterilizer. Oxy’s sterilizer, the most popular brand in Korea, allegedly sickened at least 180 people, of whom some 70 people died.

Yet, the special committee investigating the humidifier sterilizer scandal discovered that SK Chemical has been arguing the supposed harmlessness of PHMG for years.

SK Chemical submitted 101 patent applications for its components from 1991 to 2009, of which 23 concern PHMG.

PHMG has been banned from use since 2011, after the Korea Centers for Disease Control (CDC) first linked mysterious pulmonary illnesses from 2004 to the sterilizers used in humidifiers. The humidifiers themselves worked perfectly fine with plain water but consumers believed the sterilizers prevented mold and were actually good for them. In fact, they were the cause of many illnesses and deaths.

The humidifiers themselves were often used in sickrooms and by pregnant women for their health.

“This sterilizer contains chemicals including PHMG and is excellent for household use, with very low toxicity to humans,” reads an SK Chemical patent application from 2001.

In a patent application for a product containing PHMG in 2002, it said, “The product is harmless to humans and is an excellent disinfectant.”

In 2005, it said, “[The product’s] low toxicity allows it to be used in makeup products applied on human skin.”

And in 1999, it even emphasized the chemical’s harmlessness to respiratory organs.

“The product is excellent for use in fighting germs in the air, and the PHMG composite does no harm to the eyes and is safe for olfaction.”

Woo pointed to SK Chemical’s patent application in 2005 which stated, “CMIT and MIT are good sterilizers but have genetic toxicity.”

“This means,” Woo said, “that SK Chemical has for more than 10 years been selling a carcinogenic product.”

According to the civic organization Asian Citizens’ Center for Environment and Health, humidifier sterilizers sold by Aekyung and Emart sickened more than 150 people.

“Oxy apologized only after the prosecution probe began in earnest in April,” Woo said. “And that, too, was very much only a formality.”

To this, Safdar said, “I apologize for taking a legal approach to the issue for the past five years. I apologize to Korea and its people.”

The committee will visit the headquarters of Reckitt Benckiser in the outskirts of London from August 22 to 26. The committee is set to hold hearings, receive reports from manufacturers and government agencies and visit sites from July through September in order to determine the parties responsible in the humidifier sterilizer scandal and whether any of them had tried to conceal evidence.