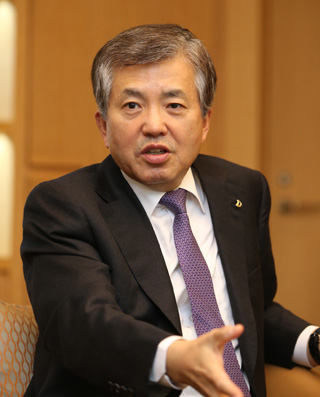 Incumbent CEO of Daewoo Engineering & Construction, Park Young-sik, whose term ended on July 14. But he still serves as head of the company due to a scuffle over the appointment of its new chief executive. [AP/NEWSIS]

Daewoo Engineering & Construction is embroiled in a scuffle over the appointment of its chief executive. The placement plan was reversed twice already. The incumbent CEO Park Young-sik’s term ended on July 14. Daewoo’s main shareholder and creditor, Korea Development Bank (KDB), has screened candidates since May and shortlisted Park for a second term.

But the state-run bank has to scrap the whole process after the final interview on June 10 because it received an order from the financial authority to recruit someone from “outside.”

But it was again stopped last week shortly before the bank was about to make a choice between the two.

Rumors ran wild about potential government meddling in the decision. For whatever reasons, the government appears not to be happy about the appointment process. Of the five review board members, two executives of KDB rooted for Park, while the other three supported Cho. So the vote was put off.

KDB Chairman Lee Dong-gull stepped in and demanded more time for the review board to think it over and come to a unanimous decision. As a result, Park Young-sik, the retired CEO of the embattled Daewoo, was called back to fill the vacancy until his replacement is determined.

What has brought about such an embarrassing fiasco?

The public invitation for CEO placement itself was farcical. Normally, the Financial Services Commission (FSC) has the say in appointing the management of a state-owned entity like Daewoo Engineering. And a senior presidential secretary in charge of economic affairs has the final say.

But if the appointment has become all muddled up to the point of the FSC or KDB stepping aside, the cause could be attributable to the Blue House. The process has ended up becoming murky — and inexplicable — because KDB or FSC cannot outright admit interference by the presidential office.

So what happened at the Blue House? Let’s use our imagination. While KDB was studying the list of choices for the next CEO of Daewoo Engineering in May, Daewoo Shipbuilding & Marine Engineering (DSME) — another entity under KDB’s control after a public fund bailout — was under fire for major losses. KDB’s revolving-door appointments were largely blamed for the poor management of the insolvent DSME.

Under such circumstances, the senior secretary to the president could have judged that another Daewoo unit the state-owned bank was overseeing had better avoid the media spotlight as much as possible by keeping Park in the seat for another term, since he had been recruited by the incumbent government and kept the company at the top place in housing supply for three years in a row. He might not have wanted to bother the president over another sensitive appointment.

But the president might have thought different. What if she casually made a comment that DSME was in such a mess — and carried out an accounting scam to cover up its huge losses — because an inside figure had headed the shipbuilder? Her top economic secretary would have been startled for misreading her thoughts and possibly losing her confidence. He could have easily forced FSC and KDB to find a chief executive from outside — instead of pushing for a plan to pick someone within the construction company.

But they could have discovered that there were no good candidates from outside. During this time, the senior presidential secretary was replaced. Even the president seemed to have no particular candidate in mind. The media was readying an attack once they sensed another parachute appointment. So, the Blue House could have decided to put off the appointment.

All this could have been avoided if the former presidential secretary simply talked straight to his boss, saying it was best to keep the current CEO at Daewoo Engineering. As the presidential aides were only looking at the president for decisions — instead of doing the advisory job they were hired for — the public sector is still full of irrelevant and incomprehensible appointments. At the end of the day, this bodes poorly for the president and the country.