‘Pets’ sure to please animal lovers

‘Pets’ sure to please animal lovers 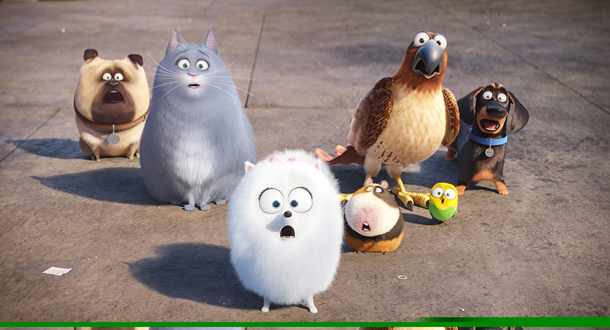 A still from “The Secret Life of Pets,” an animated feature that is slated to open Wednesday in theaters nationwide. It is produced by the same company behind the “Despicable Me” series. [UPI KOREA]

Any pet owner who’s imbued their furry or feathered friends with deep thoughts and mysterious intentions will relate to the imagination behind “The Secret Life of Pets.”

It may not have the emotional resonance of a Pixar movie, but with its playful premise, endearing performances and outstanding score by Alexandre Desplat, “Pets” is fun, family (and animal)-friendly fare.

People’s favorite non-speaking companions are brought to life here by Illumination Entertainment (the studio behind “Despicable Me”) and given voice by an all-star cast that includes Louis C.K., Kevin Hart, Jenny Slate and Albert Brooks.

Plot-wise, “Pets” follows the path Pixar set with talking toys 20 years ago in “Toy Story”: Two would-be rivals fighting for the love of their owner are forced to unite for a common cause.

Little terrier Max (C.K.) is the top dog in the life of his owner, Katie (Ellie Kemper), and a leader among the other house pets in their New York City apartment building, including neighbor Pomeranian Gidget (Slate), and the fat cat next door, Chloe (Lake Bell). But his exalted position is threatened when Katie brings home a giant, fluffy mutt named Duke (Eric Stonestreet). Like Woody and Buzz, Max and Duke are instantly at odds.

The rival pups are trying to sabotage each other when they become separated from their dog walker and captured by animal control.

This sends them on an adventure into the animal underworld: literally, the underground headquarters of a bitter bunny named Snowball (Hart) and his team of Flushed Pets. Abandoned by their former owners, their motto is “liberated forever, domesticated never.”

Max and Duke try to fit in, but Snowball soon observes, “You’ve got the scent of domestication all over you,” and sends his army of rogue animals after them. At one point, the little rabbit steals a bus.

Meanwhile, the other pets from Max and Duke’s apartment building notice the two are missing and set out to find them. Gidget, who has a not-so-secret crush on Max, leads a menagerie that includes Chloe the cat, Mel the pug, Buddy the dachshund and a guinea pig named Norman.

They enlist the help of Tiberius the hawk (Brooks) and Pops (Dana Carvey), the wheelchair-bound basset hound who knows every animal in New York.

Desplat’s jazzy, energetic score amplifies the urgency and excitement as the chase continues through the city, and clever animation highlights the quirkiness of animal behavior. Though the characters in “Pets” are entirely anthropomorphized - they speak English and can operate electronics - they retain some recognizable animalism.

When Pops wants to shut down one of his famous parties, for example, he turns on the vacuum cleaner. Dogs in hot pursuit of their friends are suddenly distracted by butterflies. And Buddy’s movements are especially amusing, as he navigates his elongated dachshund body around corners and down stairs.

It’s fun to imagine what pets get into when no one is home, and “Pets” does a great job of taking that idea to an extreme. And you thought Fluffy and Fido just spent the day napping. AP