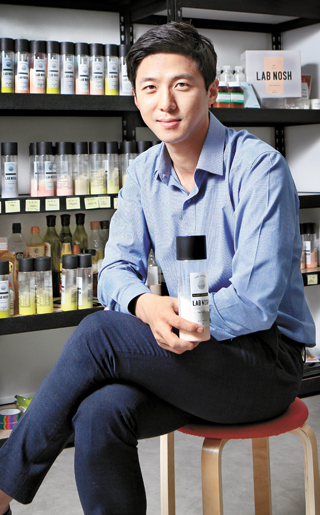 James Park, co-founder and CEO of Egnis, poses on July 21 at his office in Guro-dong, western Seoul. [PARK SANG-MOON]

Humans have long anticipated a future in which food pills would provide a day’s nutrition. As promised by science fiction, they would tackle a range of problems from the hunger of poverty to the inefficiency of mealtimes - at the likely cost of the pleasures of dining.

Egnis, a 21-month-old Seoul-based start-up, is trying to bridge the gap with Lab Nosh, a powdered meal that comes in three flavors: chocolate, granola yogurt and green cereal. Pour 400 milliliters of water into the custom-made bottle containing 85 grams of powder, shake it and drink. A single dose satisfies the nutritional needs - and 335 to 340 kilocalories depending on the flavor - required for a meal.

“I do not particularly obsess about the act of eating,” said James Park, founder and CEO of Egnis, at the start of an interview on July 21 in his office near the Guro Digital Complex in western Seoul. “I would divide meals into two categories: One is functional, the other sentimental. I don’t think our 21 meals per week should entirely be sentimental. One or two formal meals per day should suffice for those who are pressed for time or wish to control weight.”

Soylent, named for the flesh-based food in the dystopian movie “Soylent Green,” is a combination of soybeans and lentils that comes in both liquid and powdered forms. It first shipped in the United States in April 2014 and ever since, its clones and copycats have sprouted across the United States and Europe.

“Landing a job at the trading firm, I decided to work at least three years as a preparation to fulfill my ultimate goal of starting my own business,” said Park. “Yun and I made several failed entrepreneurial attempts while at college. And we were sure Lab Nosh would work in Korea and Asia, where we predicted futuristic food alternatives would soon follow in the footsteps of the United States and Europe.” 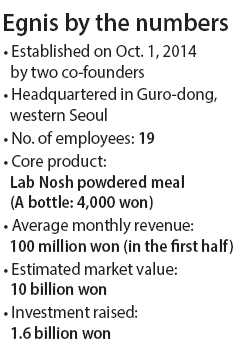 As adventurous as the co-founders were, their lack of knowledge in nutrition and food processing led to months of trial and error. They first referred to the recipes that Soylent made available to the general public to develop a so-called macro-nutritious food alternative. They had minerals such as manganese, iodine, folic acid and iron shipped to Korea by Amazon, blended them in a big bucket and sampled the concoction. The slightest mistake in the formula gave them stomachaches and headaches.

After a nutritionist and former employee of the Korea Food and Drug Administration joined the company as a board member, the development got on track.

Dr. Lee Hyung-jae, former chairman of Korea Food Engineer Association, also offered nutritional guidance and has served as an advisor at the company ever since.

Lab Nosh - nosh is a Yiddish word for nibble or snack - contains the three essential nutrients. Those carbohydrates, proteins and lipids are combined with over 20 types of minerals and vitamins in proportions recommended by the Korean Nutrition Society for a meal. In recognition of Koreans’ tendency to overdose on carbohydrates - largely because steamed rice is the nation’s staple - Lab Nosh adjusted down the portion of carbohydrates to 20 percent and hiked the percentage of protein to 30 percent. The powder contains only 5 percent fat.

Is Lab Nosh a mere Asian version of Soylent?

“Soylent, as I have tried many times before, is faithful only to its essential functions. It’s tasteless. I would compare it to a robot,” Park said. “We have modified and improved [Soylent] with flavors preferred by Koreans and Asians. The three flavor options were the result of numerous sensory tests by potential customers. We also use quality ingredients.”

Developers added a tiny portion of brown rice flakes as well as particles of baked almond, cranberry and papaya to the powder to ease the boredom of drinking and add the fun of chewing. On top of the meal replacements, five types of booster powders - 2 grams per stick - are available for specific purposes. A weight-loss booster contains a supplement called garcinia cambogia, which prevents carbohydrates from turning into fat, and a stress reliever supplement has L-Theanine as well as multiple types of vitamins.

However nutritionally perfect a foodstuff is, an important factor for is feeling full enough to not overeat. To maximize a feeling of satiety, nutritionists at Egnis have mixed dietary fiber and crystalline fructose, which help absorption of carbohydrates over time.

“A single portion of Lab Nosh drink will make you feel full for up to five hours,” Park said, “although I hear some men complain the feeling is not quite that long.”

Will substituting Lab Nosh for all your meals over a few days do any harm? “Nope,” Park said. “Six employees of Egnis spent a month drinking it exclusively to test the products’ effectiveness and to check for side effects and a medical checkup showed all of them lost weight and their nutritional balance improved.

“But I wouldn’t recommend you replace your diet entirely with Lab Nosh. I saw my staff in the experiment mentally devastated. You need to eat food for your spiritual health’s sake.”

Egnis completed product development in a year and received 600 million won in seed money from Company K Partners, a Gyeonggi-based venture capital firm. The state-run Korea Technology Finance Corporation invested 1 billion won and another Korean venture capital company is in talks to offer up to 1 billion won by the end of this month.

Most notably, the company raised over 100 million won in a crowdfunding event last November via Wadiz, the biggest crowdfunding Web platform in Korea. It was a record amount for crowdfunding in Korea and 10 times the ceiling the company had set.

Over 1,800 people joined the level of funding that promised to deliver Lab Nosh products to their doorsteps. Over the 33 days of the fund-raising period, 20 percent of those investors were so impressed by the product that they ordered more.

“The crowd-funding event was sort of a test to see if there really was a market, given the type of the products we were planning to launch had never been seen before in Korea,” Park said.

Egnis sells Lab Nosh on its home page and in a few select shops that cater to trend-setting 20- and 30-year-olds such as 1300K and 29 CM. A single serving costs 4,000 won but a one-month plan with 28 bottles carries a 119,000 won price tag after discount. Pop-up stores nationwide at Hyundai Department Stores have been more successful than expected in the past seven months.

A reviewer on the Lab Nosh home page who identified himself as a gym coach said he liked the fact that he didn’t feel hungry at night after drinking Lab Nosh instead of eating dinner. He had been drinking protein shakes until he tried Lab Nosh and he thinks it would be a nice alternative when considering his health. The product’s fancy, pastel bottles make it look even more attractive on Instagram, a strategic choice for the product’s marketing.

This month, some department stores and Olive Young, a Korea-born health and beauty product retail chain, will begin selling Lab Nosh. Park is also in talks with home shopping channels and online shopping malls to expand sales channels. Sales revenue has also been ratcheting up - from 75 million won in January to as much as 200 million won in June.

The rapid rise of single-person households and families in which both parents work will boost the need for the kind of futuristic meal replacements, Park predicts. The double-digit growth over the past three years of convenience store revenues is evidence of those trends.

“My immediate goal is supplying Lab Nosh, in a drinkable form, to convenience stores,” he said. “The price range would drop to as low as 2,000 won.”

“I am getting numerous calls from Chinese buyers,” Park said, adding the company is setting up a joint venture in Beijing soon. Online shopping malls taking direct orders from China such as Accommate and Jumei are already selling Lab Nosh products.

“Our role model is Abbott Laboratories,” Park said, referring to the largest healthcare product developer in the world. “We plan to release all different types of meal replacements - from bar-type to liquid - and go so far as to use edible insects as a key ingredient. We will come up with pills in the end.”

‘Those were the days’