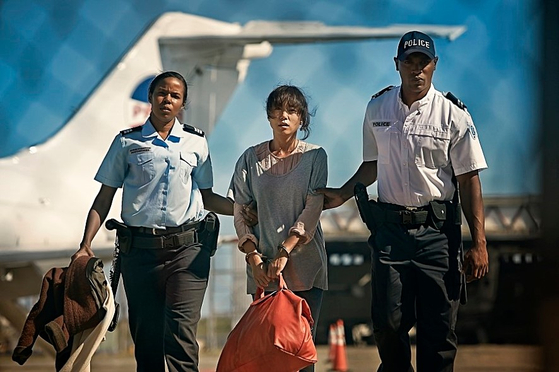 A scene from movie ″Way Back Home″ (2013) that tells a story of a Korean woman who was arrested after she is accused of smuggling drugs into France. [ILGAN SPORTS]

Over 1,000 Koreans are being held in dozens of countries for alleged drug smuggling, murder and fraud, according to the Ministry of Foreign Affairs.

According to a report by the ministry, 1,156 Koreans were imprisoned in 51 nations as of June, including people undergoing trial and already convicted.

Drug-related crimes including smuggling were the No. 1 reason for imprisonment of Korean citizens abroad for the past six years, according to the ministry. As of June, 296 were held for drug offenses, 151 for murder, 136 for fraud and 108 for theft.

What’s particularly concerning, according to the People Power Party Rep. Thae Yong-ho’s office, which obtained the ministry’s report, are reports of abuse of Korean prisoners by foreign authorities, especially those in China.


In China, 23 cases of beatings by prison authorities of Koreans held in custody were reported to the ministry from 2017 to February.

When a Korean consulate in China asked for explanation from the Chinese government of one case in November 2018, it denied there was any beating of the Korean prisoner in question, but admitted that officials “use handcuffs, gas guns, electric prods and expandable batons to subjugate prisoners who do not follow rules.”

In another complaint from a Korean prisoner in December 2018, the prisoner said he was “shocked with electric prods on both legs” until he fainted.

“The Korean citizen initially wanted to press charges against the Chinese authorities, but later decided to drop the case after consulting a lawyer,” the ministry said in its report.

There were also at least five alleged cases of Koreans being “physically abused by police” in the process of being arrested in China, according to reports from Korean consulates in China made to the Foreign Ministry from December 2019 to January.

But when the consulates asked for explanations from the Chinese government, it did not offer any for five incidents.

South Korea’s Foreign Ministry has rarely made official complaints to the Chinese government on such abuse. One rare instance concerns the alleged torture of activist Kim Young-hwan, who said he was shocked with an electric prod in China after being arrested  in 2012. The Korean Foreign Ministry at the time demanded China investigate the allegations of torture. Beijing denied all allegations.

The Korean government had more success in addressing abuses in other foreign countries, according to the ministry’s report.

A Korean prisoner complained to a Korean consulate in the United States in 2017 of being verbally abused by a prison guard. When the consulate contacted the U.S. government, the guard made an apology to the prisoner and promised not to repeat the mistake.

According to the ministry’s report, there were rarely any complaints of abuse of Korean prisoners in Japan.

By law, a Korean citizen kept in custody abroad is entitled to at least one visit by an official of a nearby Korean consulate. The Korean government is also required to contact immediately a relevant authority in a foreign country following the arrest of a Korean citizen, and to report the arrest to the foreign minister as soon as possible.

“The foreign ministry should take to heart the important responsibility to protect the human rights of our citizens held in custody abroad,” said Rep. Thae. “The ministry will have to use all its resources at hand to provide more active support to these citizens.”

‘Those were the days’