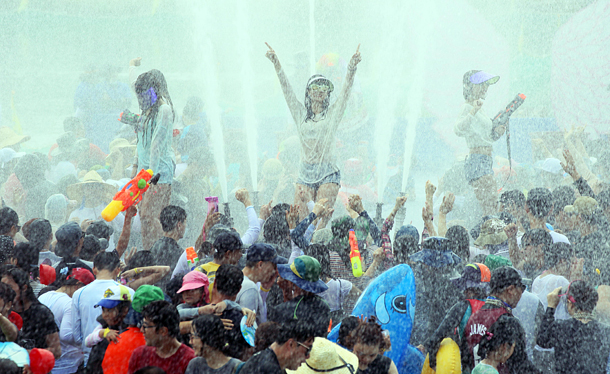 A festive crowd enjoys the 9th Jeongnamjin Jangheung Water Festival in Jangheung County, South Jeolla, on Sunday, as a scorching heat wave prevails across the nation. The seven-day festival, slated to run through Thursday, features a water-gun fight, fishing, tug-of-war, a pool party, boat-riding and a concert. [NEWSIS]

With Korea’s monsoon season having officially ended last Friday, the summer heat will now go into full swing across the nation, bringing extreme temperatures to all corners.

For today, the national weather authority said the highest temperature will fall within the range of 26 to 35 degrees Celsius (78.8 to 95 degrees Fahrenheit), while the sky will be cloudy nationwide.

The coastal areas of Gangwon and South Gyeongsang might meet sporadic rain in the afternoon due to atmospheric instability.

According to the Korea Meteorological Administration, there will be no rainfall in Korea until Aug. 10, although many areas will see cloudy skies. Temperatures will mostly surpass 30 degrees during the day and slightly fall to around 25 degrees at night.

Sporadic showers might affect some regions in the second half of this month due to atmospheric instability, but it will not be long enough to cool things off, and will instead create more humidity.

The weather authority has warned vacationers to stay at high alert for “short, heavy summer rainfalls,” saying they can flood valleys in no time, threatening the safety of nearby campers.

This year’s summer will be roughly as hot as last year, or slightly hotter. The heat will continue through September and past the Chuseok [Korean Thanksgiving] holidays, which will take place from Sept. 14 to 16.

Last Wednesday in Busan, a 53-year-old drunken man died of a heatstroke after falling asleep in his car. He was suspected to have spent hours in his vehicle that day, which police assume heated up to 60 or 70 degrees at peak time.

In Gwangju, a 4-year-old boy was found unconscious in a school bus last Friday. A teacher and bus driver were arrested on professional negligence charges, as police suspect they missed roll-call and left the young student in the hot vehicle for eight hours from 9 a.m. to 5 p.m. When the boy was transported to a nearby hospital, his body temperature was 42 degrees. He has yet to gain consciousness.