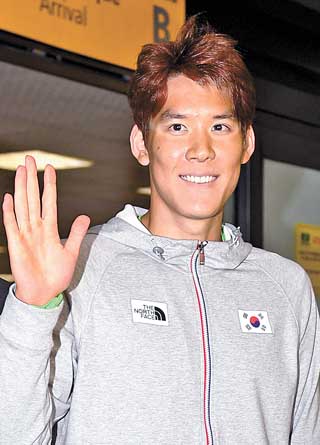 Korean swimmer Park Tae-hwan arrived in Brazil on Sunday, landing at Santos Dumont Airport in Rio de Janeiro. He was spotted in the arrival hall, tanned from his training in Florida, and with a big smile on his face.

“I finished my training well,” said Park after arriving. “I will feel even better once the competition starts. I checked the weather as soon as I landed and it really makes me feel good.”

Park became a national hero after winning gold at the Beijing Olympics in 2008, the first Korean ever to do so. Four years later in 2012 London Olympics, Park claimed two silvers from 200-meter freestyle and 400-meter freestyle. After his success on the international stage, he became an icon in Korea as an inspiration for Koreans and young athletes.

However, everything that he built up came crumbling down when he was suspended by the International Swimming Federation (FINA) after he tested positive for taking Nebido, a relatively new anabolic steroid. Park was stripped of all the medals that he earned from September 2014, including six medals from the Incheon Asian Games in September 2014.

Since then, things have been tough for the 26-year-old swimmer. Being banned by the FINA meant he couldn’t “participate in a training camp, exhibition or practice organized by his or her Member Federation or a club which is a member of that Member Federation or FINA or which is funded by a governmental agency” for the duration of their ban. He got a membership at a private swimming pool owned by former coach Rho Min-sang, which is associated with neither the Korean Olympic Committee (KOC) nor the Korea Swimming Federation, local affiliate of the FINA, so that he would have a place to train.

He served an 18-month ban by the world swimming body until March of this year. But the Korean Olympic governing body maintained its rule barring athletes who have been suspended by international sports bodies for doping from the national team for three years. This meant Park’s subsequent three-year ban by the KOC wasn’t to expire until March 2019.

Park eventually took the fight outside Korea and appealed to the Court of Arbitration for Sports (CAS) to settle the case, forcing him to undergo an exhausting legal dispute with the KOC in the lead-up to his placement on the Olympics roster.

He was finally given the chance to redeem himself when the CAS ruled in favor of Park on July 7. The KOC respected the top sports tribunal’s ruling and placed Park on the roster.

Although Park departed Incheon International Airport on July 17 and seemed happy about the decision, there was a hint of concern on his face as well, stemming from the pressure to do well now that he had a ticket to Rio. As he left Korea, he said, “It was a tough journey getting to the Olympics this year…I hope to now be able to reciprocate the support I’ve been given by fans.”

However, the Park seen at the airport in Rio seemed relaxed, an indication that two weeks of training in Florida may have given him some confidence and room to breath.

“The situation today is different than that of four years ago and I am trying to take it easy,” Park said. “I don’t feel the pressure about placement so I think I can relax a little bit. I had fun training in Florida for two weeks. I think I will carry this feeling for one more week.”

Even though Park is aware of the tremendous amount of expectations, he says he tries not to worry too much and enjoy the competition this time.

“I think if I just enjoy it, something good might come along,” said Park.