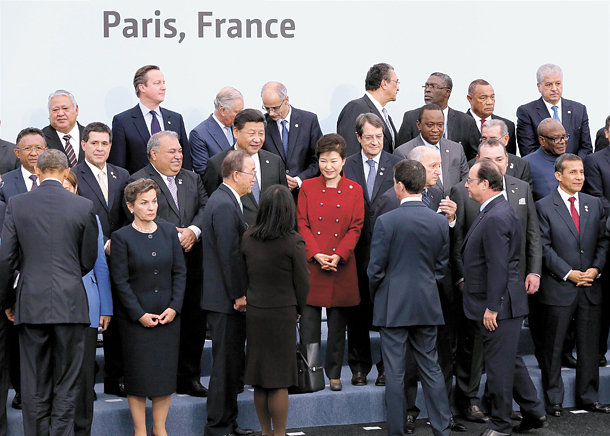 World leaders pose for a group photo at the COP21, United Nations Climate Change Conference, in Le Bourget, outside Paris, on Nov. 30, 2015. [AP/NEWSIS]

BRUSSELS — At the COP21 conference in Paris last December, world leaders made a binding pledge to set national targets, including energy-efficiency benchmarks, for reducing greenhouse-gas emissions. Now, the European Commission is nearing a moment of truth — will it set ambitious but attainable energy efficiency targets that will force individuals and industries to make real changes? Or will it bend to political pressure and set meaningless targets that will be reached anyway, with no any additional effort?

The latter approach was taken in 2014, when European leaders agreed to improve energy efficiency by 27 percent before 2030. The European Council was applauded at the time for its leadership. Nobody bothered to mention that global energy efficiency was already likely to increase by around 35 percent on its own by 2030.

The COP21 agreement has given Europe a second chance to set an example and become the global standard-bearer for energy efficiency. Environmentalists, business leaders, and academics are awaiting new targets from the European Commission, which will most likely be established in October, in a forthcoming revision to the Commission’s Energy Efficiency Directive.

So, what would be a meaningful target? If European leaders are serious about their COP21 commitment, they should embrace a 70 percent reduction on 2010 consumption levels by 2030 — more than double the European Council’s 2014 target.

A 70 percent reduction is ambitious, but not impossible. There is both an economic and an environmental case to be made for it.

While implementing energy-efficiency measures may require heavy initial investments, these outlays will be offset by future productivity growth, which is the only way developed countries can sustainably improve living standards over time.

The environmental argument for an ambitious target is not that we need to “save the Earth.” But we do need to save the climate in which humans have evolved and prospered. Energy efficiency around the world is increasing at roughly 1.5 percent per year, which is a welcome development and a sign that 30 years of forward-leaning environmental policies have had some effect. Global energy consumption, however, is rising at around 3 percent per year, indicating that we are still digging our hole deeper, rather than filling it in.

6 large economies — China, the United States, Russia, India, Japan, and the European Union — remain the biggest polluters. But most growth today comes from developing countries that now participate in the global economy. Even if these countries make significant strides in reducing emissions, they will be the polluters of the future, at least in the near term.

Globalization has increased life expectancy and improved living standards in many poor countries. But it also poses new environmental problems that will require ambitious solutions. Seen in this light, a 70 percent improvement in energy efficiency is the minimum Europe — and the world — can aim for to reach real sustainability at current levels of global growth.

Fortunately, this is all within our grasp. A 2015 study published by Ecofys, Quintel Intelligence, and the Lisbon Council concluded that Europe already has the technologies available to double current energy-efficiency levels without sacrificing economic growth. These include smart grids, LED lighting, and energy-efficient household equipment.

So why aren’t these technologies being implemented already? The reason isn’t that industry is holding Europe back; on the contrary, European industry’s environmental footprint has improved considerably in recent years. Rather, the principal energy consumer in Europe is individual households, where energy efficiency can be tripled in the coming years with the right political leadership, sufficient investment, and long-term commitment from Europeans themselves.

This takes us back to the Energy Efficiency Directive, where this work should begin. The European Commission should set “moonshot” standards that push us to higher achievements than we once thought possible. If Europe can double its energy efficiency by 2030, Europeans will look back and wonder how they ever lived differently.


*The author is president of the Lisbon Council, a Brussels-based think tank.