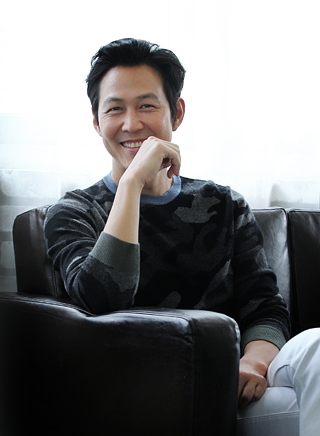 Lee Jung-jae, who plays the role of a South Korean Navy Lt. in the blockbuster “Operation Chromite.” [PARK SE-WAN]

Lee Jung-jae may have started acting 23 years ago, but if the past few years are any indicator, he’s just hitting his stride.

In his recent films, Lee, 45, has played a wide variety of roles. He was King Sejo in the hit “The Face Reader” (2013), and both critics and moviegoers said his take on the oft-portrayed character was the sexiest to date. He changed things up by playing a pro-Japanese Korean in “Assassination” (2015), and he was so good as the villain that some people confused the real Lee Jung-jae with the character, leading to many nasty online comments on subsequent articles about him.

Lee returns to the silver screen with the Korean war blockbuster “Operation Chromite.” The film is based on the Battle of Incheon, an operation commanded by U.S General Douglas MacArthur in 1950 at a time when the peninsula was almost entirely occupied by North Korean soldiers. The operation succeeded in retaking the port city of Incheon and turned the tide of the war in favor of the South.

“Operation Chromite” is often synonymous with MacArthur in Korea but the film focuses on the Korean soldiers who are part of the Korea Liaison Office (KLO). Members of the KLO perform a real-life mission called Operation X-Ray, during which they sneak into North Korean headquarters and steal key information needed for the landing to be successful.

Featuring Hollywood actor Liam Neeson as MacArthur, the film was considered the most promising film this summer, but it was almost universally panned by local critics. One online newspaper described the film as a “shoddy set of a gift box.”

Ilgan Sports, an affiliate of the Korea JoongAng Daily, recently met Lee and bombarded him with questions.

Here are the edited excerpts from the interview.

Q. How do you feel about criticism over the movie?

A. To be honest, I enjoyed it a lot. There are positive reviews and less positive reviews but I didn’t expect such harsh reviews. Of course, I was concerned about the film at one point, but I don’t think the film is really bad.

It seems like you’re interested in historical events. Your previous character Yeom Seok-jin is a pro-Japanese Korean in “Assassination” and Jang Hak-su in this film is working for the country.

I think I’m interested in history. Major broadcasters telecast documentaries on people who fought for the country on days like National Liberation Day and their individual stories are worthy of becoming feature films.

Did you feel stressed about being a part of this film since it’s partially based on true stories?

In fact, the Operation Chromite in real life wasn’t that risky. Unlike in the film, there was no carpet bombing and the operation didn’t cause that many casualties, either. But this is a film. So we paid attention to the espionage done by South Korean soldiers. I was concerned about this film embellishing too much for the sake of entertainment but now I think that was the right choice.

Is it true that you asked the production company to modify the script several times?

The first draft had too much nationalism in it. With that story, I wasn’t sure about the film but I still wanted to try it because the story deals with the espionage activities of South Korean soldiers. I told them, “Nationalism is not bad but we need to make the story more natural.” To me, the film is solely an espionage film.

Were you happy with the revised scripts?

The second one was almost the same as the first one. (Laugh) I asked the production company to revise it again. We tried to find a happy medium by changing the flow of the story or changing the characters.

It’s been said that Neeson was perfectly cast as MacArthur.

As far as I know, the script was sent to Hollywood around the time I received it. Of the four finals, there were Neeson and John Travolta. When I heard the news that Neeson would play the role, I was surprised and also found myself looking forward to the filming.

The scene in which you and Neeson appear together is impressive.

I asked [the production team] to make a scene for us because there was no single scene for just us two. Since there is no guarantee that I’ll work in Hollywood someday, I thought this might be my only chance. His character and my character are protagonists and they are linked to each other so I wanted the two to meet naturally in one scene.

Were you inspired by seeing Neeson thoroughly preparing to play his character on the set?

Of course I was. He didn’t have to visit a week earlier from the official shooting day but he did and visited some [historical] sites [related to the film].

He also brought his own wig from the States and he compared his props and the props prepared by Korean staff, choosing the better ones on the day of filming. In some important scenes, he wrote the lines himself.

Our ultimate goal is not growing the company. If many actors join, we’ll be under a lot of pressure but we just started and I want to take time and go slow.

We sometimes fight over certain issues but we try to be considerate of each other.