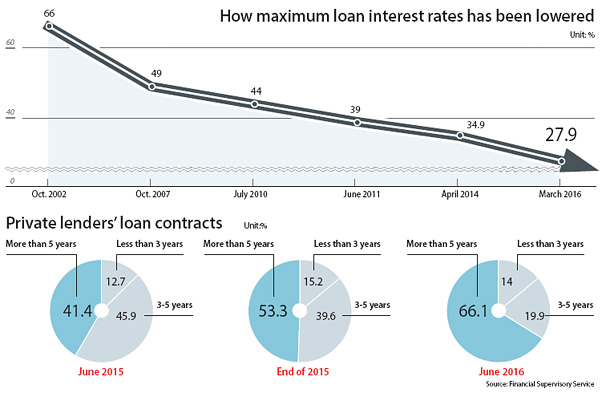 Major private lenders significantly increased long-term loan contracts of more than five years ahead of the government lowering the maximum interest rates on such loans from 34.9 percent to 27.9 percent.

According to the Financial Supervisory Service on Monday, 20 private lenders increased such loans in the first three months of this year before the government lowered the maximum interest rates in March so that the previous loan contracts wouldn’t be affected by the changes in interest rates.

This was the first action that the regulator took since the management and oversight activities on large private lenders, with total assets of 12 billion won ($10.8 million) and a loan balance exceeding 5 billion won, was shifted from the regional governments to the FSS on July 25.

Up until last year, the FSS report showed such long-term loan contracts at the end of 2015 accounted for 53.3 percent to 3.68 trillion won. In the first three months such long-term contracts of five years or higher amounted to 879.4 billion won but accounted for 66.1 percent. During the same period loan contracts whose maturities are between three years and five years have shrank from 37.7 percent at the end of last year to 19.9 percent.

One of the private lenders had all of its contracts during the first three months of this year made with a five-year maturity while another had 99.6 percent of its loan contracts with such extensive maturity.

“The private lenders, in order to secure their profitability, have led consumers to sign on long-term loan contract as they suspected a lowering of the maximum interest rates,” said an FSS official.

Users who have been borrowing loans from such private lenders with high interest rates have been growing. Most of the people who use these institutions are middle-to low-income young adults and homemakers.

The FSS said in order to change such unfair business practices it has told the private lenders to present short-term maturity loan products so that customers could choose between those with loan maturity as short as a year.

The FSS is also making stricter requirements when those in their 20s signs on a joint liability. Currently the system is banned in both the banking and nonbanking financial institutions such as savings banks, insurance and credit card companies since 2012 and 2013. However, it is still maintained in the private lending market. As of March such joint lability signed by those in their 20s in the 10 major private lenders amounts to 78.5 billion won, or 23 percent of such loans.

However, as the joint liability has huge risk, especially for such young people with limited income, when signing on the joint liability the 20-somethings have to turn in specific papers including certificate that proves the company that they are working for as well as their receipt for labor income and health insurance payments. Additionally, the private lenders are to inform them of the dangers and record the conversation where the signee understands the risk.