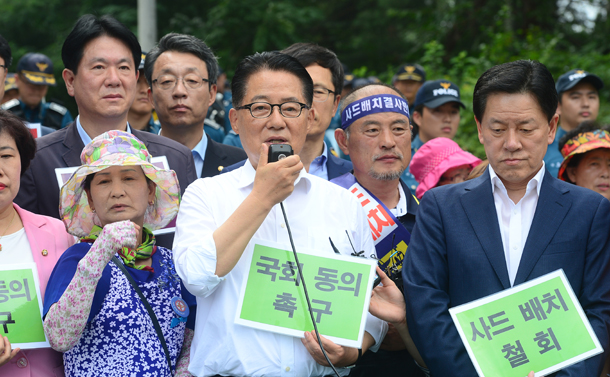 Rep. Park Jie-won, center, floor leader and acting head of the People’s Party, expresses the third-largest party’s opposition to the Terminal High Altitude Area Defense battery deployment to Seongju County, North Gyeongsang, residents on Monday as leaders of the party visited the site, which was chosen for the deployment of the advanced antimissile defense system. [NEWSIS]

The leadership of the People’s Party visited Seongju County, North Gyeongsang, on Monday to protest the government’s decision to place a controversial U.S.-led missile defense system in the southeastern rural town.

Ever since the Park Geun-hye administration announced its decision to allow the Thaad deployment, the People’s Party has strongly challenged the move. Although the leadership of the ruling Saenuri Party has visited Seongju in the past to persuade the residents to accept the deployment, this is the first time that opposition lawmakers are visiting the town en masse to protest its placement.

The People’s Party’s visit to Seongju appeared to have been arranged in order to highlight its status as an opposition party, as the main opposition Minjoo Party of Korea is maintaining a lukewarm position toward the Thaad deployment.

Earlier in the morning, Park hosted a party meeting and said the People’s Party will launch a more aggressive protest against the Thaad deployment, starting with the Seongju visit.

The lawmakers also met with residents at the Seongju County Office to listen to their opinions. Seongju has been a traditional stronghold of the Saenuri Party. Rep. Lee Wan-young of the ruling party won the April election to represent the county.

Park rejected the ruling party’s criticism that the opposition lawmakers’ Seongju visit is intended to politicize the national security matter. Saenuri floor leader Rep. Chung Jin-suk said in the morning that “lawmakers must resolve a national issue and unite the people. Politicians must not cause a split and amplify the conflict.”

More opposition lawmakers are planning visits to Seongju. The Justice Party scheduled a visit later Monday evening and the Minjoo Party’s lawmakers will make their visit later this week.

The quiet farming town of Seongju, with a population of about 45,000, has become extremely volatile, as residents fear the Thaad deployment will bring significant security and health risks.

North Korea warned of a physical response to the Thaad base, while concerns were also raised that the electromagnetic waves emitted from the Thaad radar are harmful to humans.

The government said the radar poses no harm to humans outside of its 100-meter (328-foot) radius. Last month, an angry mob of Seongju residents besieged the prime minister and defense minister during their visit to the southeastern rural town to explain the government’s decision.