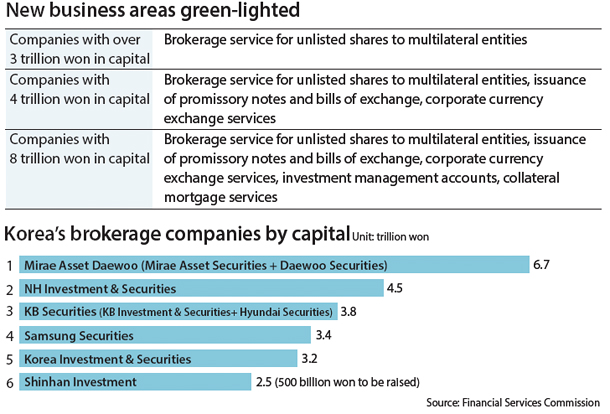 Korea’s financial regulator will allow securities companies to engage in wider range of investment banking businesses to encourage them to grow and become more sophisticated in cross-border deals and corporate financing.

The regulatory change, due to go into effect in the second quarter of next year, is the latest in a string of government efforts to shore up the country’s finance sector, which largely relies on commissions on equity transactions.

The FSC said that the notes issued by those companies will be excluded from the government’s capital requirements for lending.

Still, the bills should be worth less than 200 percent of a company’s assets and 50 percent of the funds must be lent to companies rather than individuals. In the field of corporate finance, companies of certain sizes will be allowed to offer brokerage services of unlisted shares among different companies and broader currency exchange services.

The recent mega-merger of Mirae Asset Securities and Daewoo Securities created a company with capital of 6.7 trillion won.

NH Investment & Securities is also set to benefit from the new rules.

The FSC wants large companies to increase their capital up to 8 trillion won by introducing different incentives such as a so-called Investment Management Account. The account will deal with different financial instruments including bonds and promissory notes.

The FSC said brokerage firms will have to use more than 70 percent of the funds created through the account for business loans to bolster corporate financing.

But no securities firm in Korea has capital of over 8 trillion won.

Analysts say the account system will serve as an incentive to grow.

“The integrated account allows the companies to manage different types of funds including more high-risk ones,” said Park Yong-rin, a researcher at the Korea Capital Market Institute.

“It remains to be seen whether the policy will actually nudge the companies into scaling up their capital size,” Park said, “Mirae Asset Daewoo needs around 2 trillion won more to get into the top range. But expanding that amount of capital involves strains especially after they shelled out a large sum to acquire Daewoo Securities.

Companies with 8 trillion won in capital will also be entitled to run collateral mortgage services, an area now exclusively handled by banks.

The bottom range is a capital base of 3 trillion won. Companies of that size such as Samsung Securities and Korea Investment & Securities will be entitled to add brokerage services of unlisted shares among different companies.

When a merger between KB Investment & Securities and Hyundai Securities is completed, the combined unit - called KB Securities - would have over 3 trillion won in capital under its belt.

Shinhan Investment, the securities arm of Shinhan Financial Group, is set to join the 3 trillion won club as it recently decided to raise 500 billion won in capital, pushing the company’s capital base up to 3 trillion won.

The financial regulator said that it will further help local brokerage houses deal with large scale mergers and acquisitions abroad.

The FSC plans to ask Korea Investment, the state-run sovereign wealth fund, and other government financiers to invest with local brokerage houses when the companies undertake overseas investment or advising on global M&As.

The securities industry welcomed the decision.

“The overall direction is right,” said Lee Hyeong-ki, research fellow at the Korea Financial Investment Association, “But dividing an industry by capital size can turn into some kinds of restraints later.”

“Ultimately, those division should be eliminated so that industry works on market principles.”