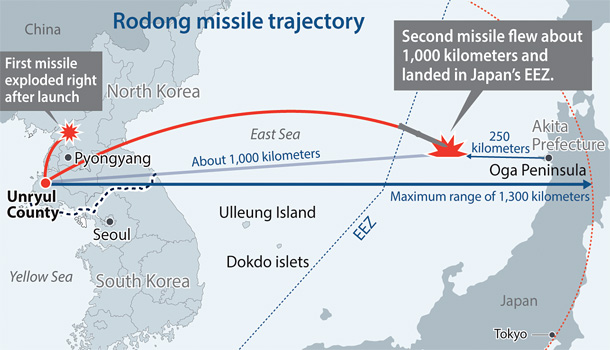 Pyongyang fired a ballistic missile that flew around 1,000 kilometers (621 miles) and landed in waters in Japan’s exclusive economic zone Wednesday morning, according to military officials.

At around 7:50 a.m., Pyongyang launched the missile from Unryul County in southwestern South Hwanghae Province toward its eastern coast, said the South Korean Joint Chiefs of Staff (JCS).

It was presumed to be an intermediate-range Rodong missile, which has a range of up to 1,300 kilometers.

The U.S. Strategic Command said in a statement that it detected “the simultaneous launch of two presumed intermediate-range ballistic missiles,” adding that one “exploded immediately after launch, while the second was tracked over North Korea and into the Sea of Japan,” which South Korea calls the East Sea.

“The missile that North Korea launched toward its east coast today flew over 1,000 kilometers and landed in Japan’s air defense identification zone (ADIZ),” a JCS official said. Japan’s exclusive economic zone covers most of its ADIZ.

“Based on an analysis of its trajectory, speed and range,” the official continued, “it is presumed to be a Rodong missile.”

The military is not excluding the possibility that it might have been a Scud-type missile, particularly the more advanced, extended-range Scud-ER, also known as the Hwasong-7, which can travel more than 1,000 kilometers, long enough to cover the entire Korean Peninsula and reach U.S. military installations in Japan.

Wednesday’s launches were the 13th round of missile tests by North Korea this year, or 29 launches in total.

The JCS condemned the latest ballistic missile launches, calling them an indication of Pyongyang’s ambition to “directly and broadly attack neighboring countries,” and South Korea’s ports, airfields and other locations.

This comes ahead of the annual joint military drill between Seoul and Washington, the Ulchi Freedom Guardian exercise, later this month, which Pyongyang has responded sensitively to in the past.

In an annual defense white paper released Tuesday, Japan was critical of Pyongyang’s nuclear and missile program and also renewed territorial claims over Korea’s easternmost Dokdo islets in the East Sea, which could have been another motivation for Pyongyang in shooting the missile in its direction.

The Japanese Defense Ministry said this was the first time a North Korean missile landed in its EEZ since 1998.

“Through the launch [Pyongyang] is trying to show off its striking ability,” said Jeong Joon-hee, spokesman of the South Korean Ministry of Unification. He demanded North Korea “immediately halt” such acts, which he added are “a serious provocation against the Korean Peninsula and the international community.”