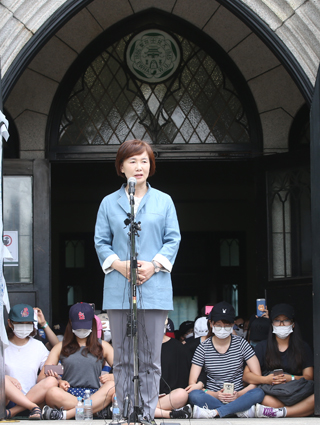 All plans for a controversial college of continuing education have been scrapped, Ewha Womans University President Choi Kyung-hee announced on Wednesday, asking students to cease their prolonged sit-in and return to their studies.

“The university decided to give up its plan to establish Light Up Your Future in Ewha (LiFE) College,” Choi announced in front of the university main hall, which has been taken over by hundreds of students since Thursday.

“I ask all students to end their sit-in so that we can solve this problem through dialogue.”

The students responded via their Facebook page “Save Our Ewha.”

“We will not back down until the president promises to completely overhaul all plans on the college of continuing education,” read a message posted after the president’s announcement. “And by a complete overhaul, we mean an official statement between the university and the Ministry of Education to put a stop to the project.”

It added, “According to our call with the ministry this morning, it said it is not planning to shut the project down.”

The students additionally asked for an apology from the university for calling police and the local fire department on Saturday, as well as a promise that no student, professor or university staff member will be punished for their engagement in the sit-in.

The students had announced Tuesday that they will not leave the main hall until the president of the university steps down. They did not renew this claim in their statement Wednesday.

The president appeared in front of the main hall for the second time on Wednesday and gave a statement in response to the students’ requests.

“The ministry announced at 10:45 a.m. today,” Choi said, “that it will continue the project [to establish colleges of continuing education] with nine other universities, but not with Ewha.”

She added, “I also express my regret for calling police on the students. The professors [who were reportedly locked in] called the police and fire department and asked to be rescued from the building. I am again very sorry for what happened.”

Choi promised that no student, professor or university staff member will face penal consequences for their engagement in or support of the sit-in.

The sit-in began on Thursday after a staff and trustee meeting on the LiFE College establishment process in the main hall, when students requested a conversation with the president on the matter and refused to leave the hall when their request was reportedly rejected.

The university called police and the local fire department on Saturday when the protestors locked in five university staff members, including professors, for two days at the university’s main hall. In order to get past the students, some 1,600 police officers were dispatched to the scene, according to the university.

The four-year continuing education LiFE College was to provide those who were employed straight out of high school with studies related to new media, health and nutrition, fashion and more. The initiative was led by the Ministry of Education and the plan was to offer opportunities for those who couldn’t afford a college education but felt the need to get one later in their careers.

Students and professors took issue with the plan, noting that the university already has a vocational education center and that the new LiFE College appears too much like a commercial enterprise unfit for an academic environment.

Hundreds of graduates have shown support to the students’ movement by returning copies of their diplomas to the school, and groups of professors released official statements in support of the students, arguing that the project “has been pursued in a one-sided manner by the president” and that its “extremely commercial” nature does not fit with the university’s academic goals.

As of press time Wednesday, the students appeared determined to continue their sit-in, with their Facebook post on hosting a graduates’ protest movement on Wednesday evening still up and running.