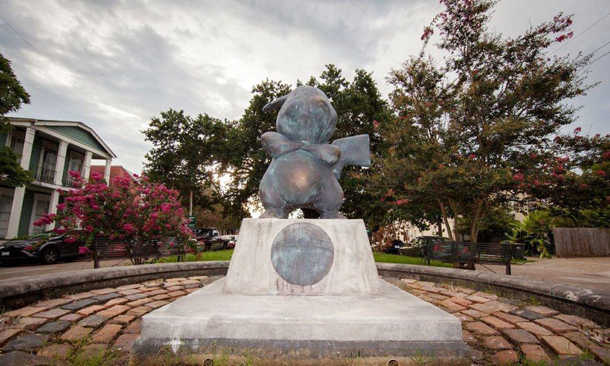 NEW ORLEANS - Amid the craze over virtual characters in the smartphone-based “Pokemon Go” game, a Pokemon that people can touch in the physical world has mysteriously appeared in New Orleans.

Someone put up a statue of the iconic Pokemon, Pikachu, at the center of a broken fountain in a park over the weekend. Pictures show a defiant looking Pikachu with his arms folded standing on a cement base with a Pokeball on the side. The inscription “#POKEMONUMENT” is also written in the cement .

Pokemon fans have been visiting the statue in the city’s upscale Lower Garden District, posing for photos with family and posting selfies with the statue on social media. One picture shows someone in a Pikachu costume posing with it.

“The kids are fans and I’m just kind of amused at how something so heavy can appear so quickly,” said New Orleans resident, Jennifer Curry, who came with her two children to see the statue. A friend who lives around the corner had told them about it.

The statue of Pikachu stands atop a pedestal with its arms crossed, ears back and looking fiercely out over the park.

Karon Reese, vice-president of the neighborhood association that oversees the area, said she first heard about the statue Monday when a friend e-mailed her a photo. When she walked by that morning with her dog, people were already gathering.

She has a neighbor who lives on the street where the park is located who is fairly certain it appeared sometime Saturday night. Since then a parade of moms with kids, young people after work, and elderly couples have come to see the statute.

“The fun thing was that it was just bringing groups of people together. It was almost like a festival,” Reese said. “It was very much New Orleans.”

Adding another layer of mystery was a man Reese encountered Monday evening. She spoke to him - he wouldn’t give her his name - and he said he’d been part of the installation, although he hadn’t created the statue itself.

She told him the statue seemed rather “Banksyesque” a reference to the elusive street artist famous for his satirical stencils that have appeared on walls in England and elsewhere. The man replied that he couldn’t confirm or deny that Banksy was involved - and then he left: “He was just very mysterious.”

New Orleans police say they haven’t received any complaints about the statue, don’t know where it came from and don’t plan to do anything about it. AP