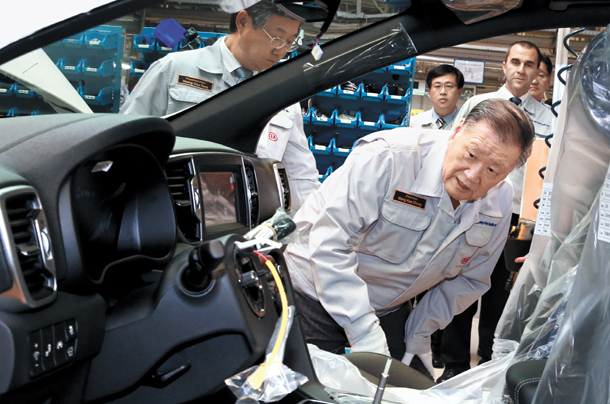 Hyundai Motor Group Chairman Chung Mong-koo inspects a car being manufactured at Kia Motors’ Slovakia plant in the northwestern city of Zilina on Wednesday. The factory currently produces Kia models such as the Venga, Cee’d and Sportage. [HYUNDAI MOTOR GROUP]

Hyundai Motor Group Chairman Chung Mong-koo visited the European plant of affiliate Kia Motors in Slovakia on Wednesday where he reiterated the importance of sports utility vehicles and eco-friendly cars in the company’s regional strategy.

“Hyundai Motor Group was able to come this far due to a successful overseas business,” Chung said at the factory. “The European car market is deemed unfavorable in the latter half of the year, but we should overcome it by strengthening sales of strategic new vehicles as well as eco-friendly and sports utility vehicles.”

Kia Motors’ Slovakia factory, located in the northwestern city of Zilina, currently manufactures the Venga multipurpose vehicle model, the midsize Cee’d hatchback and the Sportage SUV. During the January-June period, the plant produced 178,000 units, a 5 percent increase from last year.

The factory plans to manufacture more than 300,000 units by the end of this year.

With Hyundai Motor Group’s performance in North America and emerging markets such as Brazil and Russia showing struggles in the first half, the automaker is betting on the European market to compensate for the loss.

But the chairman’s business trip in Europe comes as the regional market is predicted to go through a sluggish second half. While the European car market showed a satisfying 9.1 percent year-on-year growth in the first half of the year, the latter half is expected to show a growth rate of only 0.7 percent compared to last year.

The company hopes its launch of several new models in the second half will buck the trend.

Hyundai Motor will release a new midsize i30 hatchback model in Europe next month. The hatchback has been one of the automaker’s best-selling models in the continent. It is first time in five years that a new i30 is being introduced there after the second-generation model was launched in 2011.

Sister company Kia Motors will begin selling a sports-wagon version of the K5, a strategic model made exclusively for the European car market, starting next month.

The company is also counting on eco-friendly vehicles in the European market. Both Hyundai Motor and Kia Motors will launch electric-car models for the first time in Europe in the latter half, armed with a full lineup of hybrid, plug-in hybrid, full-electric and hydrogen fuel-cell cars.

After finishing his inspection of the Kia Motors plant in Slovakia, Chung made his final stop at a Hyundai Motor factory in the Czech Republic on Thursday.