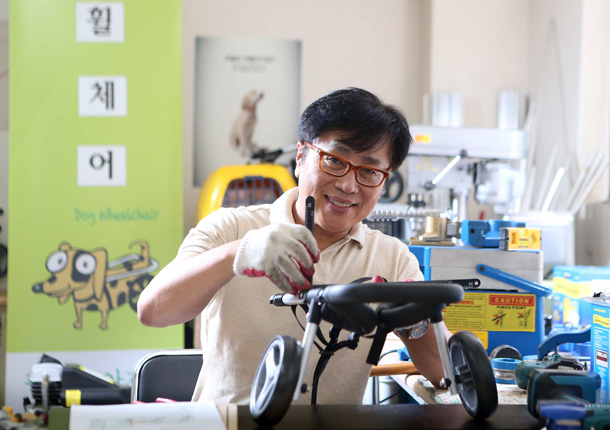 Lee Cheol, who he says he is happiest when making pet wheelchairs, said, “If people realize animals are sentient beings capable of feeling emotions, there wouldn’t be any abandoned dogs.” [OH JONG-TAEK]

A 2-year-old puppy with paralyzed hind legs runs freely across the grass with the help of a specialized wheelchair that resembles of a wagon. In a workshop owned by Lee Cheol, 58, located in Uijeongbu, Gyeonggi, Lee shows a video of a puppy using a “pet wheelchair” that he has personally crafted.

“Do you see the puppy smiling?” asked Lee. “He’s running for the first time. How excited can he be?”

Lee owns an architectural firm in Gangnam in southern Seoul, but goes to his workshop whenever he has free time.

“Bending metal pipes and drilling holes can make a lot of noise,” said Lee, introducing the tools he uses to make pet wheelchairs. “Dogs have a different body structure than humans, so specific tools are needed to make special equipment. It cost me around 10 million won ($8,927) for these tools alone.”

Lee started making pet wheelchairs in 2011. He has donated over 400 of them to date. He was an active golfer for 20 years but has been going 2 to 3 times a year as he now prefers to spend more time in his workshop making wheelchairs.

“It takes a while to make one,” said Lee. “I have limited time so I need to sacrifice something else for this.”

Lee initially became interested in dogs with disabilities in 2003. On a rainy night that year, he found an abandoned puppy.

“I saw a month old puppy in a garbage bag,” said Lee, “and his hind legs were paralyzed.”

Lee took in the puppy and named her “Iseul.” But Iseul fell into depression after not being able to stand or walk properly.

In the same year, Lee went on a business trip to Japan and coincidentally found a wheelchair designed for dogs. He bought the wheelchair for about 700,000 won ($628). After coming back to Korea, he immediately adjusted the wheelchair for Iseul. Slowly, Iseul started walking, and a few minutes later, he ran around the living room.

“That’s the first time I realized dogs can smile,” said Lee. “Animals are sentient beings that can feel emotions just like humans.”

After the spread of Lee’s donations, Lee began to get requests for wheelchairs, so he started to research specialized wheelchairs for animals. He visited a factory that manufactured wheelchairs for people and disassembled a dog wheelchair. Having built dogs wheelchairs for five years now, he is known as an “angel” among owners of dogs with disabilities.

“I hope people will pay more attention to abandoned dogs and dogs with disabilities,” Lee said.