Kakao Friends is all about simpatico characters

Kakao Friends is all about simpatico characters 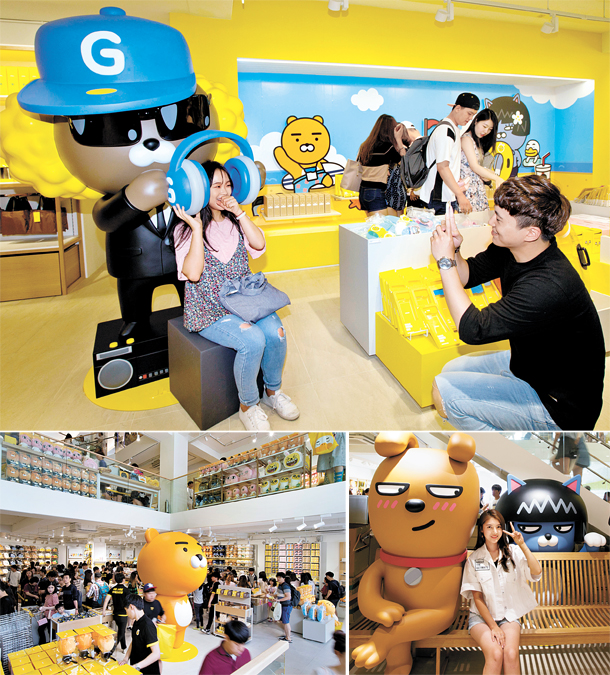 Our mobile devices are the source of a range of emotions, from the urgency of human communication to the diversion of media.

Kakao Friends’ specialty is that jolt of pleasure from encountering favorite characters.

That emotion is the foundation for Kakao Friends retail stores.

Kakao Friends is an independent corporation formed by operator of the nation’s No. 1 instant messaging app, Kakao, after its emoticon characters took Korea by storm.

On July 2, the company opened the flagship Kakao Friends Store in Gangnam District, southern Seoul. Some 1,500 products related to the eight Kakao Friends characters are sold in the shop.

There are 18 official Kakao Friends Stores across the nation. The first was in the Hyundai Department Store in Sinchon. The latest was opened at the Shilla Duty Free Shop on July 15.

Kakao Friends Flagship Store in Gangnam has three stories and is 694 square meters (7,470 square feet). Each floor offers different product categories. Stationery goods and mobile phone goods are sold on the first floor, while home interior and fashion accessories are on the second.

The third floor was converted into a coffee shop. The entire store is designed like a theme park so that visitors can have fun while making purchases.

It is not a rarity to see customers waiting in line to get into the crowded store.

“Each of the Kakao character has a distinct personality that is simply captivating,” said Kim Hyo-na, 27, who is on a summer break from studies in Switzerland. “My friends in Switzerland were curious about them, so I’m getting some products as souvenirs for them.”

Her 60-year-old mother said, “I came here for myself, because I’m in love with Frodo the dog.”

Friends Kim Ga-hee and Lee Hye-yeon said they were fans of Con the crocodile. But as there are limited numbers of standalone products featuring the character they have been scouring stores. They have even mailed Kakao Friends to beg for more Con-related products.

“We’re aiming to be a company like Disney, but we also consider fashion brands like Uniqlo as competitors,” said Park Seung-yeon, a vice president of Kakao Friends. “Disney was formed in the 1920s, but its characters are still loved even now. On the other hand, Uniqlo offers good products at reasonable prices, so we want to benchmark both companies.”

The ultimate goal of Kakao Friends stores is not profit but an expansion of the customer experience. Customers’ constant interest and curiosity are vital for the character brand business.

“In the long run, every character brand fades from existence due to reduced popularity, so we need to continually seek ways for the characters to appeal,” said Park. “To this end, breathing life into the characters is the job description of our 56 employees.”

Around 40 percent of Kakao Friends employees are designers. These professionals think about creating needs for products in different environments, and determine the compatibility of characters and products for marketing. Hundreds and thousands of sketches are drawn and shown to other teams and corporation-wide exhibitions where free exchanges of ideas are made.

The popular Ryan doll went through a mock fashion show before employees concluded that a light blue hoodie suited the character best.

The Ryan doll donning a hoodie sells out constantly. Some customers protest that they can’t get enough products, as demand for Ryan-themed smartphone cases, shirts, sofa cushions and pillows is so high.

According to the company, Ryan is a character created to give consolation to people living in overly competitive, dog-eat-dog existences.

At first sight, Ryan looks like a bear, but he is actually a maneless lion. He understands what it is like to lack something everyone else takes for granted.

Although he is big, he is also considerate. His two black eyes gaze unwaveringly as he caresses his friends whenever they cry. He is also there to celebrate their joy. He is reliable like a brother but sometimes is childish, wearing his heart on his sleeve.

These characteristics are part of the reason the characters appeal to customers so much. Other characters have their own complexes, just like humans. Frodo the dog is ashamed that he is not from a pedigreed line. Neo the cat’s gleaming, cascading hair is actually a wig. Apeach, the sexy peach, is a hermaphrodite fruit. Muzi is a pickled radish who dresses up like a rabbit, and Tube the duck always hides his feet in oversized shoes because they are smaller than other ducks. Jay-G, a macho secret agent mole, actually suffers from homesickness, wishing to return to his underground kingdom.

“When we planned the characters in the beginning, we wanted each of them to have a weakness and emotion,” said Park. “We wanted customers to emphasize and communicate with their favorite characters.”

Kakao Friends plans to diversify into more products in the second half of the year. Products will range from foodstuffs all the way to fashion goods like shoes. The company also plans to build a second flagship store. This year’s revenue goal is 30 billion won, three times larger than last year.

Some 10 million daily users of the Kakao messaging app also use the Kakao Friends emoticons.