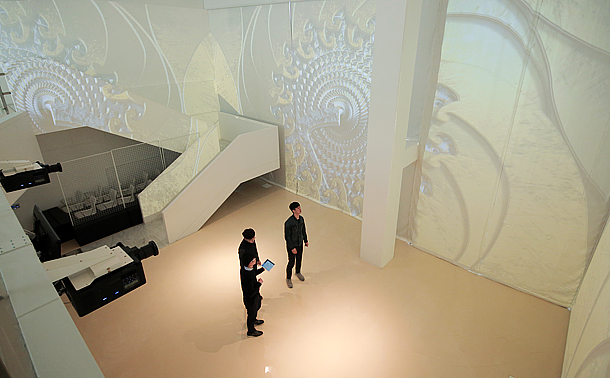 The space, located near Jonggak Station in central Seoul, is home to 90 culture-related start-ups, as well as an academy for creators of cultural content. Companies that have secured major deals include iPortfolio, which produced an English-language e-book app with Oxford University Press and EBS Media that’s available on both the Apple App Store and Google Play; Anyzac, a visual media company that signed a partnership with Walt Disney for its animation “Zombie Dumb”; and Modern Han, which designs and curates events involving traditional Korean performance, crafts and food.

“It’s hard to produce tangible results in a short period of time [with culture content],” Yoon Tae-yong, a deputy minister of the ministry’s cultural content industry office, told reporters. “It’s meaningful in that we’ve established a business ecosystem for culture content. By the end of this year and early next year, there will be more major deals.”

Choi Bo-keun, the complex’s vice executive director, said that by the end of this year investment would hit 25 billion won after more complexes are opened outside Seoul and more events and fairs are held.

He added that the K-Culture Valley in Goyang, Ilsan, which opened in May as a way for people to experience different elements of Korean pop culture, will be more active, and that a venue exclusively for K-pop concerts called “K-Pop Arena” will open in Olympic Park in southeastern Seoul next year, and that both will boost interest in Korea’s cultural content.

The complex is part of the Park Geun-hye administration’s “Flourishing Culture” initiative, which works to support the creation of cultural content that can enrich Korean lives.