‘If I decide if I am ready to be president, I will tell the people’

‘If I decide if I am ready to be president, I will tell the people’ 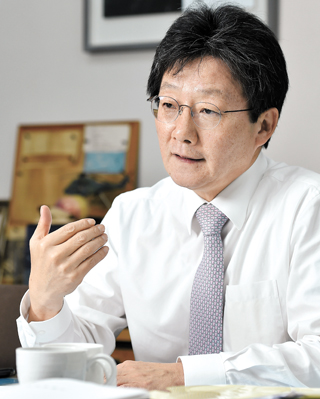 When President Park Geun-hye invited all Saenuri lawmakers to the Blue House for a luncheon on July 8, the most anticipated event was her meeting with Rep. Yoo Seong-min. They had a brief conversation, which lasted just 35 seconds, and Yoo recalled “A thousand emotions went through me.”

In his interview with the JoongAng Ilbo on Thursday, Yoo talked about the past year involving his relationship with the president, the party and the voters.

After a 13-day war against Park, Yoo stepped down from the floor leader post of the ruling party in July last year. Park issued a lengthy, angry criticism at Yoo for his “politics of betrayal” over a deal he brokered with the main opposition party and going after his own political gains. Since then, he became an icon of resistance to the president.

After Yoo asked to run in Daegu’s Dong B District for a fourth term, Park loyalists denied him a Saenuri nomination, claiming Yoo has a different ideology from the ruling party. Yoo subsequently left the Saenuri Party on the eve of the April general election, ran independently and won. The party reinstated him in June after a fierce debate.

“Someday, I want to clear up all the misunderstandings” with Park, Yoo said. “There will be a time to restore trust with the president.”
Yoo said the Saenuri Party’s decade-long factional strife, which began in 2007 during the presidential primary between Lee Myung-bak and Park, was a struggle to seek individual politicians’ benefits. “The time has come to end it,” he said, adding that he see some people among the Park loyalists who will cooperate with him in the future.

The following is excerpt of his interview with the JoongAng Ilbo.

Q. Why do you think you faced criticism for pursuing “politics of betrayal?”

Wasn’t it careless for you to refer to the presidential office as “the kids in the Blue House?”

The draft of Park’s speech to be delivered at the United Nations in 2014 included one part that said, ‘It is not true to say that Korea is overwhelmed by China,’ and this was later removed.

I asked the Foreign Ministry how this could happen, and they said they do not know. I then asked them if it was the presidential secretaries, but I used the word, “kids,” often used in the Gyeongsang province’s dialect. It’s not a bad expression, but some criticized me for having called the president childish. I was misunderstood as having attacked the president.

Why do you think the Saenuri Party lost the general election?

How did you feel when the party denied you a nomination?

Being denied the nomination, leaving the party and running as an independent was actually not so hard. It was actually more difficult for me to see the youngest, the most reform-minded and talented lawmakers of the Saenuri Party slaughtered during the nomination process on March 15 just because they were supporting me.

Some may have tried to persuade you to rest for one term.

Many recommended that I should stay low-profile and accept the situation, stay with the party and find a better opportunity next time, such as a by-election. I could not agree with the suggestion that I should accept a decision that is not just. That was a time I seriously thought about why I do politics.

Why do you do politics?

It is the instinct of conservatives to protect the community from destruction and develop it. We have seen examples of great social security reform and welfare reform in advanced countries by conservative leaders when their communities faced crises. The time has come for conservative-led reform in Korea.

Specifically, what do we have to reform?

Economic policies, education, childcare, labor, welfare and tax policies. Will we continue as we have done until now? Will we continue giving benefits to conglomerates while rejecting welfare demands by saying we have no money? Will we allow the public education system to collapse? Will we just keep the current childcare policy? Will we do nothing about irregular workers?

I think the party has the ability to drastically change its policy lines toward such issues. Insisting on policies that are two decades old just because it is a conservative party means it has given up on advancement.

How is that different from the liberals?

There are differences. Just for the Terminal High Altitude Area Defense (Thaad) deployment issue, the position is clearly different from the liberal parties.

I have seen the ballistic trajectory of the North’s Rodong and Scud missiles. When we fly an airplane, we fly at an altitude of 10 or 11 kilometers [6.2 to 6.8 miles].

The North Korean missiles fly at altitudes 130 to 150 kilometers. The North is practicing firing missiles up to 50 kilometers higher than the atmosphere and dropping them along the East Coast at a fearful speed. But the leftists in Korea said we do not need the Thaad. The Chinese government and the media are acting arrogantly toward our sovereign right for defense. That is not a proper attitude toward a strategic partner. We must react more sternly.

You are now considered a Saenuri presidential candidate.

Making a presidential bid is like burning everything about oneself. When we were an opposition party, we thought we had to win at all costs and that victory was justice. But as we went through the Lee Myung-bak and Park Geun-hye administrations, my thoughts changed completely. We had to share responsibility for all failures and face criticism.

It is more important to become a successful president than winning the presidential election. The next president, in other words, must be a president who can push forward enormous reform.

I am seriously considering if I am truly ready. When I come to a conclusion, I will face the people and tell them with pride.

Will the Saenuri Party win the next presidential election?

In principle, the possibility is very low. It must open the primary to everyone and the primary rule must be fair to the voters. Next year’s presidential election will inevitably be a contest of lines, ideologies and policies.