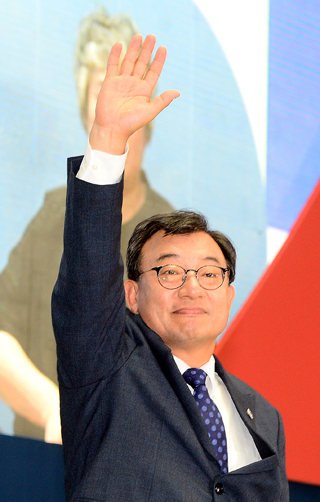 Rep. Lee Jung-hyun, a close ally of President Park Geun-hye, celebrates his election as chairman of the ruling Saenuri Party at a party convention held in Jamsil Stadium in southern Seoul on Tuesday. [NEWSIS]

Rep. Lee Jung-hyun, a close ally of President Park Geun-hye, was elected chairman of the ruling Saenuri Party Tuesday, becoming the first politician from Jeolla to head the conservative political party, which has been dominated by figures from the rival Gyeongsang region.

He also promised to approach issues that affected people’s livelihoods from a perspective normally associated with the liberal opposition parties. He vowed that the ruling party will work for the common man, not just Big Business and the elite, to win the next presidential election.

Of the 76,116 valid votes casted in the convention, Lee won 44,421. Factoring in the public opinion poll and the delegate voting outcome conducted earlier this month, Lee won 40.9 percent, winning an overwhelming victory that proved the influence of Park loyalists over the ruling party.

His victory ensured a smooth relationship between the ruling party and the Blue House for the remainder of Park’s presidency. Lee will also oversee the party in the months leading up to the 2017 presidential election.

It took 31 years for the 57-year-old politician to become the chairman of the largest political party with 129 lawmakers. Lee started his career as an aide to a lawmaker and steadily climbed the political ladder.

He had to rebuild his political career up after it bottomed out in 2004. After losing a race in the 2004 general election, Lee made a strong appeal to Park, then-chairwoman of the Grand National Party, the predecessor of the Saenuri Party, to pay more attention to the Jeolla region. In the regional-sensitive politics of Korea, the party was supported by conservative voters from the Daegu-Gyeongsang region.

Since then, Lee served as Park’s mouthpiece. After the Park Blue House was launched in 2013, he served as her political senior secretary and public affairs senior secretary. He won his first term in the National Assembly as a proportional representative and won two more terms from the constituency of Suncheon, South Jeolla.

At a national convention Tuesday, the Saenuri Party elected its chairman and five members of the Supreme Council. Of the five council seats, one was reserved for a woman and another for a younger politician. The Supreme Council has nine members including the chairman, floor leader, chief policymaker and the five elected members. The chairman will appoint one additional member.

Of the five elected Supreme Council members, four are considered Park loyalists. With Lee as chairman, the Saenuri Party’s leadership will largely be dominated by the Park faction.

The delegates’ votes and ballots cast by 69,817 members of an electoral college Sunday counted for 70 percent of the candidates’ scores. A public opinion poll counted for the remaining 30 percent.

A two-month-long interim leadership headed by Kim Hee-ok ended as of Tuesday.