‘Busan’ director reflects on film’s wild ride: Yeon Sang-ho’s first live-action movie was a historic success - so why is he still worrying?

‘Busan’ director reflects on film’s wild ride: Yeon Sang-ho’s first live-action movie was a historic success - so why is he still worrying? 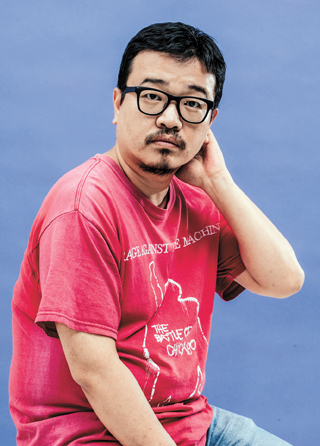 The plan was always to make “Train to Busan” a hit, but director Yeon Sang-ho was still caught off guard by just how successful it has been.

Before the formal release of the film, which is Yeon’s first live-action project, its distributor began selling tickets to previews hoping to drum up anticipation.

The film sold 6.2 million tickets in its first week, and on Sunday, it became the 14th domestic film in history to sell more than 10 million tickets.

“Train to Busan” generated buzz because it’s the first big Korean zombie movie, but it was also a critical darling, with reviewers praising the action sequences and smart, claustrophobic settings: a KTX bullet train, as well as stations around the country.

The film also asks big questions, including whether it’s better to live alone and be safe or try to save others and risk your neck, and people have called its explicitly social focus refreshing amid a wave of stagnant commercial Korean films.

That focus is something of a trademark for Yeon, who is best known for his animated films “The Fake” (2013) and “The King of Pigs” (2011) that had a similarly critical perspective.

In a recent interview with JoongAng Ilbo, Yeon talked in more detail about how “Train to Busan” came about.

Below is an edited excerpt, but be warned: it contains spoilers.

Left and middle: Stills from “Train to Busan,” in which director Yeon focuses on how ordinary people might act and behave during a zombie outbreak. Right: A still from “The King of Pigs” (2011), Yeon’s first animated film. [JOONGANG ILBO]

Q. “Train to Busan” is proving to be a box office hit. What do you think of the film’s success?

A. I think many Korean moviegoers were already prepared to accept and enjoy a zombie film. Along with the zombies, though, I added spectacles that are found in the familiar places around our lives here in Korea. The audiences will feel some kind of connection with the characters. Several directors told me that this film had to be well-made in order to establish a new genre in Korean film.

What has inspired you to choose zombies as the main element of a film?

The story of “Train to Busan” originates from “Seoul Station,” an animated film [that will be released on August 18]. “Seoul Station” depicts Seoul infested with zombies. While thinking of these zombies, I wondered what would happen if one of the zombies hopped the train bound for Busan, which became the inspiration for the live-action film. The motif of the animated film is the homeless always residing in Seoul Station. They live quite a different life from us, but we usually take them for granted as a part of the station. So, I asked myself whether people would easily notice the difference if a homeless person with only half a face left roamed around the station.

Weren’t you concerned about how the zombie element would blend with the contemporary Korean setting?

I referred to the films such as “United 93” (2006) and “Captain Phillips” (2013) [both directed by Paul Greengrass] rather than zombie movies. These films display incidents realistically in a limited space, since the characters in “Train to Busan” are fighting zombies in a limited space as well. I also wanted to add a bit of the mood portrayed in “The Mist” (2007) and “The Road” (2009). The former explores people stuck inside a market not knowing what’s happening outside and how this creates a unique power structure. The latter shows a father and son wandering around post-apocalyptic earth. Through Seok-wu (Gong Yoo) and his daughter Su-an (Kim Su-an), I wanted to build an apocalyptic feeling. So first, I made Seok-wu’s child a boy, but after meeting Kim, I changed my mind. Of course, the most important concern I had was just how to make the moviegoers enjoy the experience.

What do you think is the most important element for a film to get popular?

Placing action at the center and making a film that doesn’t let you catch your breath are essential elements. To do so, explanations of the characters should be lessened. Also, as the zombies attacking KTX is extraordinary setting, I had to make the characters as normal as possible to compensate. The film also includes persistent conflicts between normal people caught in an extraordinary situation, so I tried to heighten this by having characters of all different ages, sexes, social statuses and relationships - Seok-wu is a fund manager while Sang-hwa (Ma Dong-seok) is a macho husband of Seong-gyeong (Jung Yu-mi), a soon-to-be mother, for instance.

“The Fake” and “The King of Pigs” seem to track their characters’ past and examine how they became aware of social problems. How did you make your characters in “Train to Busan” different?

My animated films did similar work, and making two similar projects back-to-back made me feel as though I was getting stuck in a deep rut. If the characters of those two films get deeply developed, both “Train to Busan” and “Seoul Station” feature the scenes of the zombies themselves as kinds of characters. The moviegoers might not perceive the difference, but to me, it makes a big change. Actor Ryu Seung-ryong, who liked “The Fake,” read the script for “Seoul Station” and decided to do the voice. He said it felt really different from the other film.

What did you want audiences to make of the film’s central question, which I took to be whether it’s better to put others at risk to save yourself or band together with strangers for survival?

I wanted to show that trivial incidents, luck, coincidence among others change people from good to bad or vice versa. There is no entirely good or bad person. Through such a setting, I hoped it would give a portrait of today’s society. Also, it was important to feature situations that audiences could understand, such as the opposing actions of Seok-wu and Sang-hwa confronting zombies to save others while Yong-seok jeopardizes others to save only himself. Actually, I wanted people to see that Seok-wu and Sang-hwa are not doing some heroic deed but are just trying to save their families and friends. Yong-seok, on the other hand, isn’t evil - he’s just afraid to die while saving everybody.

Why did you root the passengers’ confusion in the gap between the reality outside and the peachy media reports?

That’s the world we live in right now. We are deluged with information, much of which conflicts itself. Also, the government is portrayed sardonically in the film because the Korean government has yet to properly handle a major disaster.

Considering the film’s storyline, it felt like the characters’ attitudes are more important than the zombies themselves. Is that true?

Yes, the zombies are not that important. If I considered the existence of zombie vital, I would have focused on their details - what they look like and how they came to be. Zombies are only the fictional creatures in the film. It is more interesting to focus on how ordinary people behave when confronted with zombies and make that look real on the big screen.

Why did you focus on the emotional change that happens when some characters become zombies?

When humans change into zombies, they discard both human consciousness and rationality. That is the general outline. In their very last moment as a human, nobody knows what aspect of their personality will pop up. This setting is shown at the beginning of the film when the voice of Seok-wu’s mother is heard on the phone. I wanted to make the audience afraid by showing how a generous mother can suddenly change into a monstrous zombie who swears and shouts. The fear and anxiety come from watching the disappearance of rationality. I remembered the fear I felt when watching “A Good Lawyer’s Wife” (2003). In that film, a father curses in front of his family while on the verge of dying from liver cancer. I was afraid that I could be such a person later when I might not be fully rational.

Why did you leave the ending hopeful?

I did not give a complete ending to the film, hoping that audiences might imagine their own ending. Also, the last survivors represent the next generation. In “The Road,” the father leaves a message to his son that seems to make the story restart from the beginning. Cartoonist Choi Gyu-seok of “Awl” read the film’s script and said that the relationship between Seok-wu and Su-an raises a question: What can the present generation pass down to the future generation? Thus far, we’ve valued development - economic, societal, all that - so that the next generation can have a better future. However, development will someday end. Even today, we conceive that development itself is meaningless. Then what do we have to pass on to the future generation? I wish that very question in the ending can be delivered to the audiences.

In general, how did you like working on your first live-action film?

Animated films are a manifestation of the director’s inclination and ideal world. Live-action films, on the other hand, are collaborations with many people. I am absolutely glad that this film is loved by many people, but at the same time, I feel worried too. I will continue working on both animated and live-action films but I am anxious that future films that reflect my views strongly won’t attract audiences of this size.