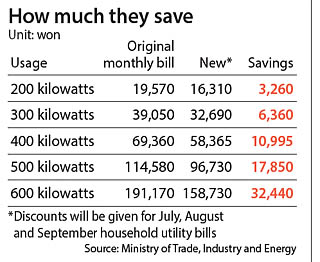 The government announced further details about the three-month discount on electricity bills Friday, but the size has disappointed many Koreans.

According to the government, the adjustment will cost about 420 billion won and all 22 million households in Korea will receive discounts. On average, a household will pay 19.4 percent less during the three months.

In Korea, a progressive billing system is applied to household electricity usage, which means that people pay more per unit if they use more. There are six levels of usage and six rates per unit. For businesses and industries, there is no such system.

The steepest discount, 23 percent, will be given to households in the third and fourth levels. Households who use the largest amount of energy, in the fifth and sixth levels, will get discounts of less than 10 percent.

A household of four people that uses a standing air conditioner for eight hours a day is in the sixth level. For July, August and September, it will have to pay 345,490 won per month. The discount would save them 36,880 won per month, or 10.4 percent. That is far less than the average of 19.4 percent.

“People who use more electricity will receive a smaller discount,” said Hong Joon-hee, a professor at Gachon University, who teaches energy related subjects.

The opposition Minjoo Party and People’s Party announced Friday that the three-month discount won’t solve the problem and argued that the government should revise the law as a whole.

“Our party didn’t ask the government to come up with temporary cuts,” said Woo Sang-ho, floor leader of the main opposition Minjoo Party. “The government needs to make efforts to change an electricity billing system that is complicated and unfair.”

Park Jie-won, floor leader of the People’s Party, compared the government’s discounts to children’s pocket money for buying chewing gum on Friday. “We urge the government to reduce the six brackets in the system to four and reduce household electricity bills sharply,” Park added.

Meanwhile, the Trade Ministry gave warnings to 43 retailers who kept their doors open during operating hours after visiting 14 major shopping districts across the nation, including Myeongdong and Gangnam in Seoul.

The action was an attempt to lower electricity use across the nation.

According to the Trade Ministry on Friday, the officials visited 2,350 retailers and found 1.8 percent of them were violating the rule on keeping doors shut to save on electricity during a heatwave.

“The rate has decreased from 5.3 percent in July’s inspection,” said Kim Sang-mo, a director at the Trade Ministry. “We are planning to fine retailers who received warnings 500,000 won if they are caught doing so again.”

The government will fine them up to 3 million won if they repeatedly operate their businesses with their doors open. The inspection period will last until August 26.

The government fined retailers for keeping their doors open from 2013 to 2015, but said it wouldn’t resort to the measure earlier this year.

As a heat wave continues to hit Korea, daily electricity consumption reached its highest level in history on Friday. According to the Trade Ministry, the country’s electricity demand rose to 85.18 million kilowatts at 5 p.m., setting a new record.