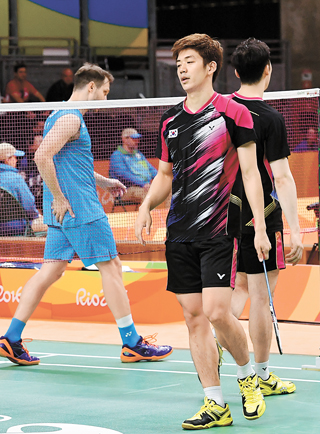 After suffering an unexpected loss on Saturday, Lee Yong-dae and Yoo Yeon-seong finished second in their group to advance to the quarterfinals in the badminton men’s doubles at this year’s Summer Olympics in Rio de Janeiro, Brazil.

In the final round of the group stage on Saturday, the duo played against Russia’s Vladimir Ivanov and Ivan Sozonov, who are ranked number 13.

With two wins and one loss under their belt, Lee and Yoo had to settle for second place, although this did not stop them from going into the next round, thanks to their wins from earlier in the Games. The Korean duo had edged Taiwan’s Lee Sheng Mu and Tsai Chia Hsin as well as Australia’s Matthew Chau and Sawan Serasinghe en route to the knockout stage.

Although a spot in the quarterfinals has been secured for Lee and Yoo, the match against the Russians, as well as the early ones, left them with some homework to do before the knockout stage begins. Even during their win over the Australian duo, Lee and Yoo struggled more than expected, giving out a set against Chau and Serasinghe during the match on Friday.

“We have to make sure we don’t make the same mistakes,” Yoo said, according to Yonhap News Agency. “We’re going to rest tomorrow to regroup and then give everything we have starting in the quarterfinals.”

While the No. 1 duo went to the knockout stage without much difficulty, Mohammad Ahsan and Hendra Setiawan of Indonesia, a duo that is ranked No. 2 after Lee and Yoo, became victims of an upset and failed to advance to the next round.

The Indonesian duo, who were considered the rival to watch for the Koreans, finished third in Group D after Hiroyuki Endo and Kenichi Hayakawa of Japan and Biao Chai and Wei Hong of China.

Along with Lee and Yoo, Kim Gi-jung and Kim Sa-rang, No. 3 in the world, topped the Group C to advance to the quarterfinals in men’s doubles. In women’s doubles, Jung Kyung-eun and Shin Seung-chan as well as Chang Ye-na and Lee So-hee all came out of the preliminaries as top in their respective groups. Finally, in mixed doubles, Ko Sung-hyun and Kim Ha-na, ranked No. 2 in the category in the world, qualified for the quarterfinals as the winners of Group D.

With five teams staying on in the Games a little longer to try their luck in the playoffs, the probability of Team Korea earning a medal in badminton is higher than ever.

Korea captured one bronze from badminton during the 2012 London Games thanks to Jung Jae-sung and Lee Yong-dae.

While they will try to outperform the result from the London Olympics in the men’s doubles, female badminton players of Korea will try to save face and redeem themselves after both of its teams in women’s doubles were disqualified at the London Games after being involved in a match-fixing scandal.