Hyundai makes a car that listens

Hyundai makes a car that listens 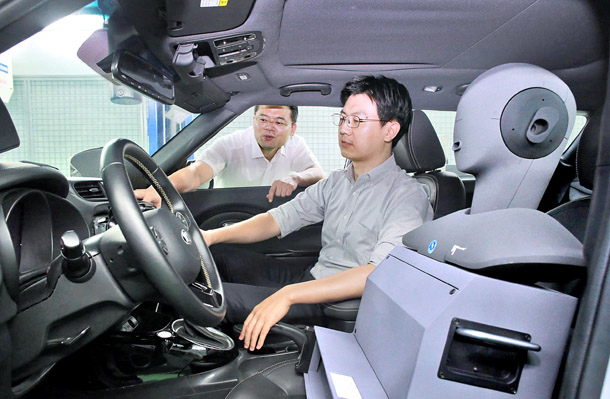 
The soundproof doors of Hyundai Motor’s IT lab in Yangjae, southern Seoul, resembled a sci-fi thriller movie as scientist and engineers gravely conducted experiments on Bluetooth and voice command technology.

The navigation system automatically turned on and started giving directions when a pre-recorded voice on a crash test dummy placed on the driver’s seat asked for “Starbucks near Chino Hills.”

Paik Soon-kwon, a researcher at Hyundai Motor who is in charge of the IT center, said hundreds of recordings varying by gender, race, language and accents were stored on the customized test dummy.

The lab was also testing if the automated voice command would work under actual driving conditions. In creating a similar environment the lab installed several speakers within the test car that would make road noise. 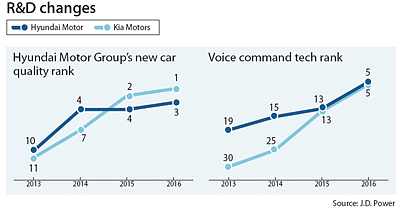 Global automakers, including Korea’s Hyundai Motor and Kia Motor, are focusing on voice command systems, which will be crucial in autonomous or self-driving cars. Because these robotic vehicles aim for a hands-free experience, drivers will steer them with their voices and words instead.

IT giants like Google and Apple are continuously developing voice command technology, but a car is not a smartphone. An error in speech recognition in a smartphone is not a major problem. In a vehicle, it’s a matter of life and death. So carmakers have a long way to go before releasing the function to the market.

“At the current stage, voiced commands like, ‘Run at 150 kilometers’ or ‘Brake’ have a 90 percent recognition rate,” said Paik. “That 10 percent error rate is what we’re concerned about.” He added that a real-life application is possible only if the software functions at a 99 percent success rate.

Hyundai Motor’s automobile IT laboratory staffs are called the company’s “special ops troops.” Its researcher team has 13 voice recognition professionals who have previously worked in companies such as Samsung Electronics, LG Electronics and Motorola. Unlike the automobile conglomerate’s other research complex in Namyang, Gyeonggi, the IT lab is located on a basement floor of the company’s headquarters. That is meant to emphasize its importance and also make collaboration easier with other IT corporations and universities in Seoul.

The research center was established by Hyundai Motor Group chairman Chung Mong-koo to improve the company’s voice command tech as soon as possible following a J.D. Power’s quality survey for automobiles in 2013, in which Hyundai Motor ranked a near-lowest 30th in voice command and Bluetooth areas.

The lab’s focus was on cutting back on customers’ complaints by improving the voice command and Bluetooth function while maximizing its use within the car.

The research lab has been able to reduce the failure on voice command by studying different accents and genders.

As a result Hyundai and Kia’s ratings on the J.D. Power surveys have improved every year. This year Kia Motor reached first place while Hyundai Motor took third place, the best ranking that the two Korean automobile companies have received so far.

Hyundai Motor’s lab introduced a voice command system that has simplified the process. Currently when using a voice command and setting up the destination on the navigation system, the driver first has to push a button that has the image of a mouth. The car then asks the driver for an order. The driver then commands the car to “set up destination.” When the car asks for the designation, the driver indicates a general area like “Seoul.” When the car navigation systems accept, the driver can go into specifics like “Starbucks.”

The commands have to be given step-by-step with accurate pronunciation.

Starting next year, when using the voice command the driver needs only to push the button and after saying “set up designation,” the driver could simply say “Starbucks near Seoul station” for the navigation system to work.

Carmakers such as Mercedes-Benz, BMW and Toyota have not yet developed the technology to such an extent. Hyundai Motor Group plans to apply the function to next year’s batch of Sonatas, Grandeurs, Sportages, K5s and Genesis models.

“Human speech has unlimited variations, so standardization is very hard,” said Paik. “But in the end, we’ll make ‘talking’ cars just like KITT from the 1980s ‘Knight Rider’ TV series.”