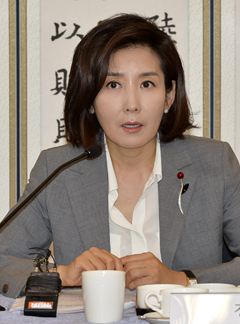 A team of nine sitting lawmakers will visit Dokdo, Korea’s easternmost islets, today in a symbolic message to reaffirm the country’s sovereignty over the territory, which Japan has frequently claimed control over.

The latest visit falls on the same day Korea celebrates its 71st anniversary of liberation from Japanese colonial rule, which ran from Aug. 29, 1910 to Aug. 15, 1945.

The lawmakers will ride a helicopter from Yeouido in western Seoul this morning and spend two to three hours in Dokdo talking with police officers there, inspecting facilities and answering questions raised by two civic groups who will visit on the same day.

The visit is also meant to encourage one of the civic groups’ effort to travel 600 kilometers (373 miles) from the westernmost side of Korea to Dokdo mainly by bike, a journey that ends today.

Tokyo has reportedly told the Korean Embassy in Japan it felt “regretful” about the trip, highlighting its belief that the Dokdo islets are Japanese territory.

In an interview with Yonhap News Agency, Na was said to have replied that it was “preposterous” that Tokyo would denounce Korean lawmakers for visiting another part of their own country, adding she “can’t understand” Japan’s objection.

Less than two weeks ago, Tokyo laid claim to the East Sea’s Dokdo islets in its annual defense white paper on August 2 for the 12th consecutive year.

Japan’s defense ministry submitted the white paper to its cabinet. In the paper, it described Takeshima, Japan’s name for Dokdo, and the Northern Territories, or Kuril Islands, as its “sovereign territory,” adding that these territorial issues “remain unresolved.”

The announcement was protested that same day by both Korea’s Ministry of National Defense and the Ministry of Foreign Affairs.

In a country where the wounds inflicted by Japanese colonial rule remain raw, the territorial dispute over Dokdo runs much deeper than what can be seen. Korea links Dokdo with a barrage of other issues dating back to the early 20th century, when women were forced to work as sex slaves for Japanese soldiers and prisoners of war were subjected to brutal medical experiments.

In negotiations to redefine Japanese territory after World War II, officials agreed upon the Cairo Declaration in 1943, which stated that “Japan will also be expelled from all other territories which she has taken by violence and greed.”

The San Francisco Peace Treaty, however, signed in 1951, mostly by Japan and the Allied powers, failed to settle ownership over Dokdo, falling short of mentioning other islands previously discussed.

Since Korea established a small police detachment on Dokdo in 1954, Tokyo has urged Seoul to file the case with the International Court of Justice - a demand Seoul has persistently declined, claiming the island belongs to Korea “historically, geographically and under international law.”