Stress causes more police officers to take their own lives

Stress causes more police officers to take their own lives 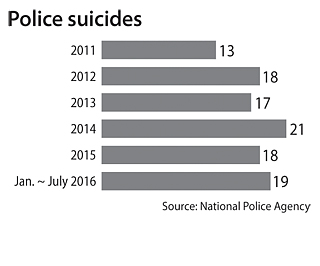 The number of police officers committing suicide is increasing.

The higher suicide rate is explained by the nature of police work: the stress of dealing with brutal cases and violent criminals. When the National Police Agency conducted a Post Traumatic Stress Disorder (PTSD) test with 17,311 police officers in 2012, 82.4 percent were found to have experience of psychological shock at work. Out of the 82.4 percent, 37.2 percent were considered high-risk for trauma.

“I can’t stop thinking about the look in the murderer’s eyes,” said one police officer. “The murderer even appears in my dreams sometimes.”

“Police officers nowadays suffer from discord with their families and loved ones, who do not understand why they need to work day and night and be called on unexpectedly,” said a police officer under anonymity.

Park Oe-byeong, a professor of police administration at Dongseo University, points out that all of Korean society, not only police officers, is losing its resilience to stress.

The strict hierarchy and internal inspections within the police also are cited as causes for distress. On July 29, a 56-year-old lieutenant at Hwaseong Dongbu Police Precinct in Gyeonggi, killed himself. He was depressed at being investigated for breach of office regulations.

“We’re in the special inspection period right now. Even the smallest problem is disclosed in the local network, including the officer’s name, affiliation, and type of punishment,” said a police officer at Gyeonggi Provincial Police Agency.

The National Police Agency has been running special trauma centers for police officers since 2014 in Seoul, Busan, Gwangju, and Daejeon. However, the total number of police officers is nearly 120,000, and the budget for stress care isn’t big enough.

“It is imperative that we increase the number of trauma centers and recruit consultants who fully understand the characteristics of police work,” said Kwak Dae-Kyeong, a professor of police administration at Dongguk University.