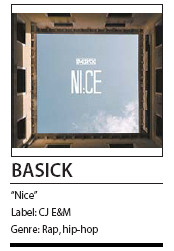 Basick, winner of the hip-hop survival audition program “Show Me the Money 4” (2015), has released his first mini-album, with all the tracks completely written by him, showing a songwriting capability that has remained dormant for years.

The album includes a variety of guest artists, with seven of the eight tracks featuring other talents. Basick deviates from his original style of hard hip-hop beats, a bold effort that has been acknowledged by many critics.

The first track, “Can’t Find Love,” is about his own life story and recalls the past 10 years of his music career. The heaviness of the lyrics and rhythm project the loss and hurt of his past, making for a poignant listen.

Hwasa of K-pop girl group Mamamoo is featured in the title track “Nice.” The cheerful vibe from her voice and harmonies create a breezy summer mood. Basick reportedly spent a great deal of time deciding on the melody, asking acquaintances for more than 40 instrumentals in order to find the best one. “Summer in My Bedroom,” with its R&B style, also shows how the artist has evolved from his rap roots.