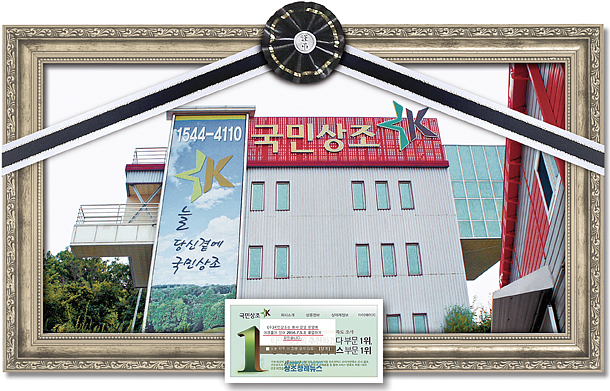 The head office of Kookmin Sangjo in Gimpo, Gyeonggi Province, and the announcement on the company’s website right after the company shut down on Aug. 5. [MAEIL MARKETING]

Kookmin Sangjo, a funeral service company with around 90,000 customers, went out of business on July 5 and is at risk of being unable to make full reimbursements.

But its customers, seeking ways to receive reimbursements, are having trouble reaching the company, unable to connect either by phone or online. Before closing down the site, Kookmin Sangjo simply posted an announcement that read, “As of July 5, 2016, Kookmin Sangjo is closing down due to difficulties in management.” It did not include information about reimbursements or follow-up measures. 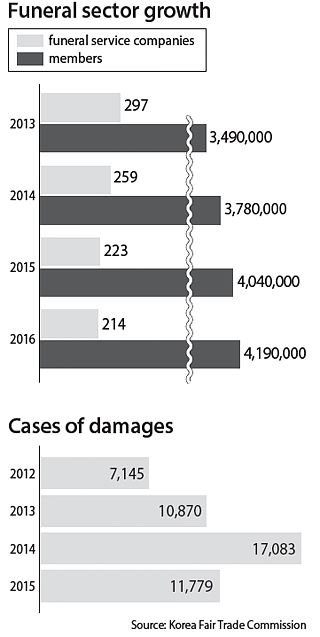 “Although official estimations are around 30,000,” the employee said, “rumor has it that about half of the total customers are serving and former police officers.”

According to the Installment Transactions Act, funeral service companies that receive payments on installments must deposit 50 percent with a bank or a mutual aid cooperative. The cooperative uses this money to recompense customers 50 percent of their payment when a company goes bankrupt or shuts down. Out of the two mutual aid cooperatives for funeral service companies, Korea Mutual Aid Cooperative Association (Kmaca) and Korea Sangjo Mutual Aid Cooperative (Ksmac), Kookmin Sangjo was enrolled in Kmaca.

Having received 94 billion won ($84 million) in advance, Kookmin Sangjo should reimburse 47 billion won, but the deposit it made to the Kmaca proved to be around only 9 billion won, the rest of which is to be made up by the Kmaca.

Unfortunately, mutual aid cooperatives are also going through hard times. With more than 60 funeral service companies shutting down in the past two years, the cooperatives are having trouble making up for the deficit of each company.

“Many people think mutual aid cooperatives are able to cover the deficits, but in reality, the cooperatives themselves are not doing well, either,” a funeral service company official said under the condition of anonymity. “Of course, above all, the funeral service companies are to blame for not paying the deposits properly, but it is also the cooperatives’ fault for poor regulation of their companies and shady management of funds.”

“There are also cases of mutual aid cooperatives easing the deposit burden to recruit more member companies,” said Kim Yeon-jin, a team manager of the Korea National Council of Consumer Organizations. “It is the responsibility of the Korea Fair Trade Commission (KFTC) to oversee such actions and regulate them.”

According to the data submitted to the National Policy Committee during the parliamentary audit last year, out of the companies’ advances received, the Kmaca had received 9.3 percent and the Ksmac had received 17.8 percent. This is not even close to the prescribed deposit of 50 percent. With the mutual aid cooperatives seemingly incapable of fulfilling their core responsibilities, chances are that customers may not be able to receive half, let alone most, of the payments they had made.

“The industry is becoming more and more competitive, and some companies are showing lax ethical standards, involved in embezzlement and breach of duty,” said an official of the Installment Transactions Division at the KFTC. “We are frequently conducting on-the-spot inspections to oversee if deposits of advanced payments are properly made.”

Some companies even falsely report the number of their customers in order to reduce the amount of deposits that have to be made.

In order to set up measures for damage, the KFTC revised a bill on July 29, making it an obligation for funeral service companies to send their customers statements on prepaid expenses, and to submit the details to the KFTC at least once every year. In the event of falsification, companies may be fined 3 to 5 million won.