‘What I did was part of my occupation,’ says Kim

‘What I did was part of my occupation,’ says Kim 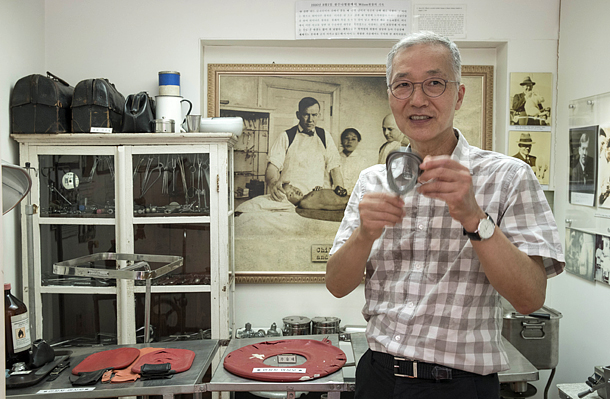 Drive down the No. 17 national highway, which links Suncheon and Yeosu in South Jeolla. Go behind the Yeosu International Airport and Wilson Leprosy Center and Rehabilitation Hospital shows up. Even though it is located in a remote area of the far southern part of the Korean Peninsula, the hospital is noted nationwide for orthopedics and dermatology.

Dr. Kim In-kwon, honorary president of the private hospital, was named last month by JW Foundation as the fourth winner of the Seongcheon Prize in recognition of his contribution to providing medical services for the underprivileged. (The ceremony is scheduled for Aug. 23.)
The annual prize was established by the nonprofit foundation run by JW Group, a leading pharmaceutical company, to commemorate the group’s late founder Lee Gi-suk, also known as Seongcheon. The prize only goes to those engaged in medical sector who have served to enhance medical welfare to become social role models.

The 65-year-old doctor has been recognized for helping out patients of leprosy, otherwise known as Hansen’s disease, correct their disfigured body and polio patients rehabilitate. He also introduced artificial joint surgeries for them.

After graduating from the medical school at Seoul National University, the orthopedic specialist stayed in Sorokdo, an island off the coast of South Jeolla as a public health doctor to serve his three-year military duty from 1980 through 1983. The island is where leprosy patients were kept isolated for almost a century under the government supervision. He moved to the current hospital as soon as his duty was finished, to treat patients ever since.

The hospital near Sorokdo dates back to 1909, when Dr. Forsythe, a missionary dispatched from the United States’ Southern Presbyterian Church, treated a leprosy patient lying in a ditch. Dr. R. M. Wilson, another doctor-missionary, established a clinic specializing in Hansen’s disease in Gwangju, South Jeolla, and it was relocated to the current space in 1926. The JoongAng Ilbo sat down with Dr. Kim.

Q. Congratulations for being awarded the Seongcheon Prize.

A. What I have done is nothing really special. This is my workplace and what I did was part of my occupation. I was sincere doing what I was supposed to do.

It isn’t easy to take a uniform occupational path for 34 straight years.

Working here, I have barely seen the conflict between doctors and patients, which many say is prevalent at many hospitals. The exemplary doctors seen in textbooks are still spotted here. That’s why I think I could have continued working with the least pride needed to perform the role as a doctor.

What motivated you to treat leprosy patients when you were young?

When I was at medical school, I never had a chance to see lepers, nor did I treat them. I never imagined treating them. But there was this rule that forced doctors-to-be to treat at villages with no hospital for six months during the four-year medical residency period before proceeding to take the national exam for medical specialist. That led me to visit Sorokdo. It was October of 1977 and I met lepers for the first time in my life. I tried best to treat them like other humans. Then I could see a person, not a face. I got friends with them and was no longer afraid of the disease. I met several doctors there and all of them were different from the stereotypes. They were more humane and cared more about patients. So I made up my mind to settle here.

Did you have a lot to do at Sorokdo as an orthopedist?

When you contract leprosy, your fingers get crooked later, depriving you the ability to hand-write properly. Doctors abroad developed surgery that helps straighten the fingers. In Korea, doctors and nurses sent by Damien Foundation in 1963 launched the surgery in Korea. Damien Foundation in Belgium specializes in battling against leprosy, in memory of Father Damien, a Roman Catholic priest from Belgium who died of leprosy after caring for the leprosy patients in Hawaii. But as they were gone home, the operation was halted. So I gathered the nurses and physical therapists to resume the operation. Dr. Shin Jung-sik, then head of the hospital sent me to India to learn the operation more thoroughly and I thought it would be a waste of time and effort if I left the island after acquiring all the knowledge of the Hansen’s disease.

That led you to the private hospital that treated leprosy.

Yes. I and Dr. Shin clicked at a time when the Korean medical treatment stood at a very poor level. Treating Hansen’s disease is very simple and I wanted to do other stuff too, in which regard Wilson Hospital was a perfect place. I had many calls from other general hospitals run by universities and large hospitals but I chose to remain here because I could never leave my patients.

You expanded the scope of treatment from leprosy to polio and other disabilities.

Yes I did, largely because the number of leprosy patients was gradually reducing. Back in 1983, there were 3,500 patients in Sorokdo and now there are 530. We no longer see new occurrence.

Our hospital also made name for taking care of polio patients.

Dr. Stanley Topple, an orthopedic doctor, came here in 1959 and worked until 1981. He headed this hospital from 1965 till 1978. As word of mouth spread about his medical practice, polio patients from around the country came to visit. He not only treated the disease but also made a lot of efforts to produce and supply artificial legs and to promote patients’ rehabilitation.

Your hospital has pioneered artificial joint surgery field since the 1980s.

We started the operation in 1973, which is pretty early for Korea. I first learned about it between 1975 and 1980, when I served as resident. The problem was the cost of the surgery was 5 million won ($4,571) at Seoul National University’s medical center? the cost for a house at the time.

What made such costly operation possible?

Missionaries here bought not only artificial joints but also surgical instruments from Hong Kong to save costs. Their thrifty life style may have helped a lot too. When we sent a mail of inquiry about advanced artificial joint surgery instruments to the missionaries in the United States, they sent the instruments as well as some of the doctors to teach us how to use them. After all, sacrifice and humanitarian support from numerous doctors have made what the hospital is now. It’s been over a decade since my hospital has conducted the largest number of artificial joint and hip joint surgeries each year across Korea.

You retired in March. What was your post-retirement plan?

I haven’t made detailed plans but it would be the best idea to go somewhere that needs me most. One option would be working at a hospital in a third world. At this moment, I am still here and will stay until the hospital recruits new doctors.

You received 100 million won cash from the prize. Where would you want to spend it?

I have a lot of places in mind to spend it on but I have to discuss the plan with my wife. I have one academic group that is in need of financial support and I would also want to donate to my alma mater and some teachers of mine who are in hardship. The rest, I will give to my wife.